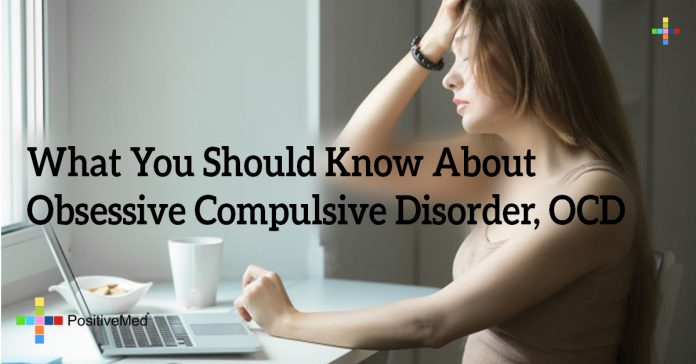 What You Should Know About Obsessive Compulsive Disorder, OCD

About 2% of world’s population suffers from OCD sometime in their life.
The average age in which OCD develops is 19-30 years.
People with OCD are more likely to have other anxiety disorders.

Obsessive-compulsive disorder is a type of anxiety disorder that involves unwanted, uncontrollable, and unreasonable thoughts that are often frightening. People with this disease are trapped in a vicious cycle of repetitive thoughts and behaviors. They suffer from distressing thoughts, images, and obsessions. Some people with OCD realize that their obsessions are unexplainable while others do not. People who realize this problem often try to help themselves get rid of their thoughts but often doing so does not help and adds to their anxiety level. OCD also involves various fears, like fear of germs. To overcome this fear they wash their hands several times, even until their hands are sore and chapped. Another example can be fear of leaving your car unlocked. A person might go to the garage to check several times.

There is a difference between being a perfectionist and having OCD. Some people like their floors to be spotless to do so they may clean their floor several times, this does not mean they have OCD. OCD should be suspected if your worries start affecting the quality of your life. OCD is nothing to be ashamed of and getting treatment can help a great deal.

Some common obsessions include:

Fear of being contaminated by germs, making mistakes, hurting others physically, need for constant reassurance, excessive need for things to be in order, and fear of evil

Some common compulsions include:

Repetitive washing and cleaning, counting things several times, repeatedly checking things like car locks or gas stoves, resistance to shaking hands or touching doorknobs, and demanding reassurance
The exact causes of OCD are unknown, however experts have divided the cause into two categories.

This includes changes in the body’s natural chemistry and brain function. Our bodies use neurotransmitters that enable communication among neurons in the brain. Low levels of a specific neurotransmitter called serotonin are linked to development of OCD. Biological factors also involve inheritance from parents.

This includes environmental triggers that increase stress and lead to development of OCD. It may be child abuse, significant changes in living situation, distance from or death of loved ones, concerns regarding relationships, past accidents, or illness.

Also known as exposure and response prevention therapy (ERP), psychotherapy is considered the most effective treatment for OCD. With this treatment the person is deliberately exposed to the feared object or situation like dirt or gas stove and learning healthy ways to overcome their anxiety. This treatment takes time and is mastered by effort and practice and can be performed with individuals or groups. Support from family and friends is also required to completely treat OCD.

Antidepressant medicines approved by food and Drug Administration (FDA) for treatment of OCD are Clomipramine, Fluvoxamine, Fluoxetine, Paroxetine and Sertraline.
Experts recommend talking to your doctor and identifying the triggers that lead to repetitive thoughts and behaviors.

Good medical advice and care can eradicate the problem as much as possible. Take your medications on time, pay attention to warning triggers, and believe that you can overcome this disorder.