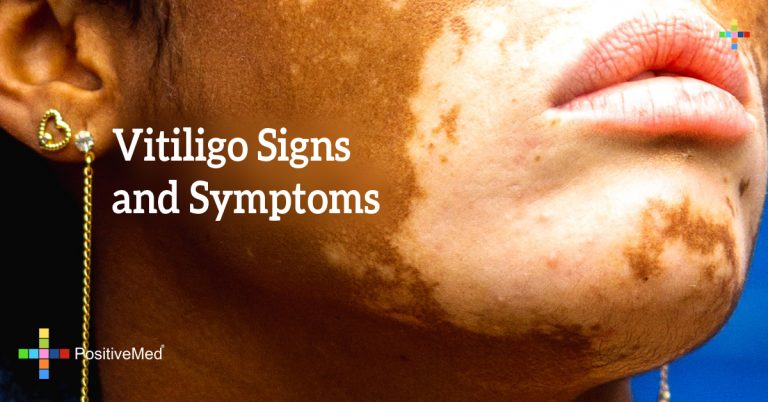 Vitiligo Signs and Symptoms
By PositiveMed-Team
Edited By Stephanie Dawson

Vitiligo is a skin disorder in which white depigmentation patches of irregular shape and size appear on various parts of the skin. It’s a long term problem and if not treated properly it may become chronic. The white patches develop on certain sections of the skin because of loss of skin cells called melanocytes. These skin cells are responsible for giving skin its color and protecting it from harmful UV rays from the sun.

This skin disorder affects all races but is more evident in people with darker complexions. This disease generally starts with smaller patches which grow over time with constant reduction in melanin-producing cells.

The exact causes of Vitiligo still remain a mystery of medical science however various research conducted in this field point out some possible causes which are mentioned below.

1. Some experts believe that Vitiligo happens when the immune system becomes overactive and starts destroying the melanin-producing skin cells.

2. Some argue that severe sunburn or cuts may lead to development of these white irregular patches on the skin.

3. Studies show that a stressful event or sudden trauma may lead to this autoimmune disorder.

4. Research has also linked this skin disease to genetics. People whose ancestors have this are more prone to it.

Vitiligo is a harmless disorder and generally does not have any bad effect on the body. It’s a rare disease, statistics show that around 1% of population is affected by it. It’s non-transmittable from one person to another. This skin disorder may develop on any skin type and has no age, gender, or cultural discrimination. Studies conducted by dermatologists have found that generally people who have this disease start developing symptoms in their 20’s.

The symptoms of Vitiligo are generally quite evident and can be spotted easily. The main sign as listed previously is loss of pigmentation which results in milky-white patches on various sections of the skin.

Less common symptoms may include the following:

1. Unexplained and premature whitening of body hair is an early sign of Vitiligo. This could be on your scalp, eyebrows, eyelashes, or beard.

2. If you observe variation in the color of the inner layer of your eye, or retina, it may be an indication of Vitiligo.

There are various patterns of Vitiligo:

As the name suggests with focal pattern the white patch is confined to one or a few particular sections of skin. This pattern is more noticeable in the initial stage of the disorder especially in children.

This is the most common pattern of Vitiligo. In this pattern the white patches develop on both sides of the skin in a symmetrical manner. The patches have no specific shape, size or design.

The milky-white patches only appear on one side of the skin. It’s a rare pattern and only 10% of those afflicted develop it.

There is no 100% effective cure to this disorder that can eradicate the patches completely, however there are remedies and practices in place that can slow down or stop growth of the white patches and may return some natural color to your skin.