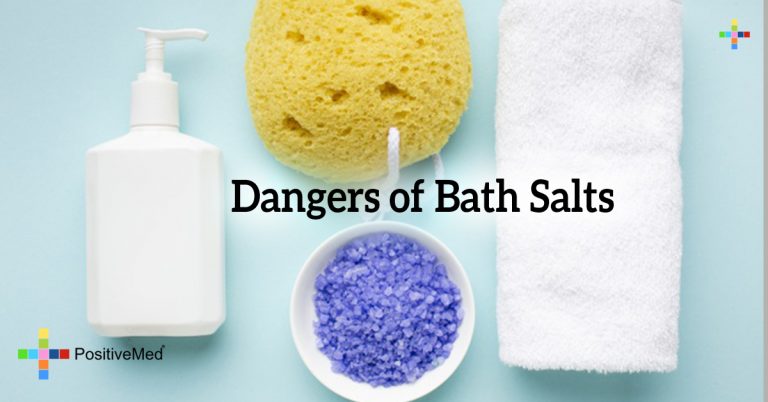 Dangers of Bath Salts
By PositiveMed-Team
Edited By Stephanie dawson

There are a number of designer drugs containing substituted cathinones known as bath salts. Their effect is similar to that of cocaine and amphetamine. There were instances when these drugs were being sold under guise of being bath salts so they are frequently still called that. Bathing products like Epsom salts look similar to the white crystals of this drug, yet they are chemically very different. In an attempt to avoid the prohibition of drugs it’s often mentioned on the packaging, “not for human consumption.” They are often packaged to look like bath products and are named things like White Dove or Lady Bubbles, however the chemicals in them and the high they produce can be devastating for lives and communities.

Hospital emergency rooms and poison control centers across the United States have reported that people consuming these bath salts have been found experiencing agitation, paranoia, and hallucinatory delirium. Psychotic and violent behavior has been exhibited by some of the users.
Using bath salts has resulted in several deaths, 20 in Florida alone, and over 23,000 ER visits annually.

Health care providers have also reported other symptoms that include:

Synthetic cathinones have been found to be highly addictive by experts. A study was conducted on this with rats in which scientists found the effect to be similar to the effect produce by methamphetamine wherein escalating self administration patterns of MDPV was noticed.

There is an intense craving for this drug amongst the users and it has also been indicated that dependence, tolerance and strong withdrawal symptoms (usually associated with drugs) could possibly be induced by frequent consumption of bath salts.

Effect of Bath Salts on the Brain

The ingredients of bath salts are similar to that of amphetamine and compared to those of cocaine. There are various different synthetic cathinones used to make bath salts amongst which methylone and mephedrone are the most common. The level of the neurotransmitter dopamine in brain circuits are raised by these chemicals very much like cocaine and methamphetamine.

It was revealed by a study that dopamine levels in the brain are raised like cocaine by the synthetic cathinones used in bath salts but is ten times more potent. Another study has shown that the level of serotonin in brain is raised by use of bath salts which results in hallucinations.

Users are ending up in psychiatric wards, dead, and some have lasting brain damage. People with college degrees can no longer remember enough facts to do a day’s work. Similarly to meth it can be addictive the very first time you use it, in some cases the first time is the last due to death.