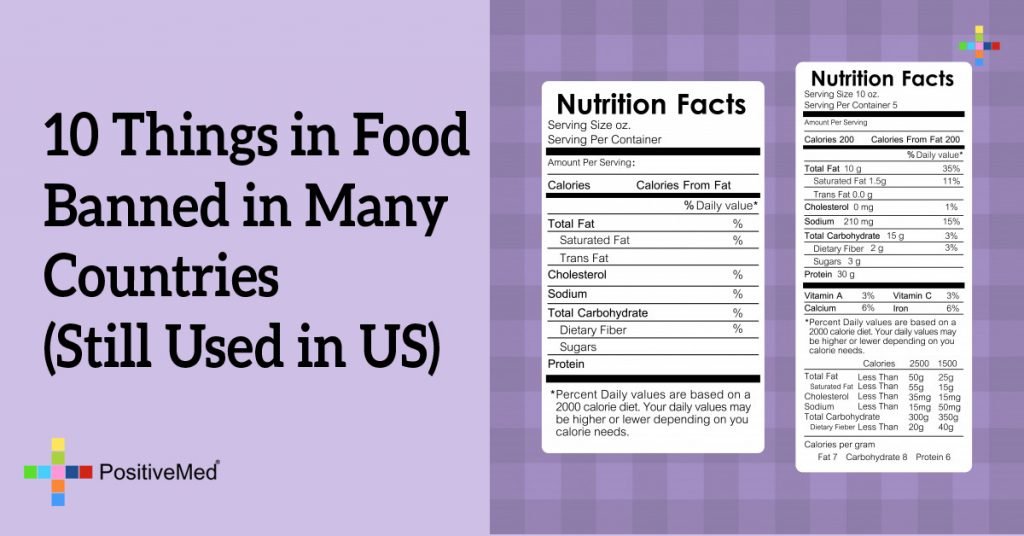 10 Things in Food Banned in Many Countries (Still Used in US)
By PositiveMed-Team
Edited By: Stephanie Dawson

Many of us don’t pay much attention to the ingredients in food we buy. While some ingredients are essential, some are added to add taste or color. Mentioned below is a list of 10 ingredients banned in other countries of the world but still legal in US.

Both are used as preservatives in many chips and cereals available in US supermarkets. These ingredients have been shown to increase cancer risk in tests conducted on animals by the US Toxicology Program. BHA and BHT are not allowed in Australia, Canada, Japan, or all of Europe.

Azodicarbonamide is used in white bread and buns to improve texture. Its banned in UK, Australia, and other European countries because it interferes with the human respiratory system which can lead to asthma and allergic reactions. In Singapore using this ingredient may lead to imprisonment of 15 years or fine up to $500,000.

Its a hormone injection given to cows in the US to increase milk production. Its banned in Germany, France, Italy, Canada, and others. Per American Cancer Society cows that are given this hormone are more likely to get udder infections so more antibiotics are given to them. This increased use of antibiotics may lead to severe health problems, milk containing this ingredient should be avoided.

Potassium Bromate is added to breads in US to avoid time involved in baking and saves money for bakery owners. Using this ingredient may lead to cancer in thyroid and kidneys. Its banned in Canada, Peru, Nigeria, and Brazil. USDA hasn’t banned it but does regulate its labeling.

This is added to foods to make them fat-free. Its banned in the UK and Canada because it can cause cramps and uncontrollable diarrhea. It also takes away the body’s ability to absorb nutrients.

In a study conducted on pigs it was found that the pigs given genetically modified corn and soy had frequent stomach inflammation and uterus enlargement. Manufacturers in the US are not legally obliged to label products as GM, its production is banned in France, Greece, and Algeria.

Blue dye no 1, also known as brilliant blue, is banned in Austria, Denmark, Belgium, Switzerland, and Germany because it can lead to hyperactivity, aggressiveness, irritability, and learning problems in children. Its often found in ice cream, cereals, packet soups, and icing to provide their beautiful color.

Yellow no. 6, also known as sunset yellow, is the 3rd most widely used coloring ingredient in foods like macaroni and waffles. This coloring agent is associated with tumors in adrenal glands and kidneys. Using turmeric instead of this additive is a good idea. Its banned in Finland and Norway because of these health hazards.

Genetically modified soybeans are banned in Austria, Hungary, Greece, and Bulgaria. Studies conducted on animals found that GM soybeans may lead to allergies, sterility, and birth defects. Its used in energy bars, breads, and deli meats freely sold in US supermarkets.