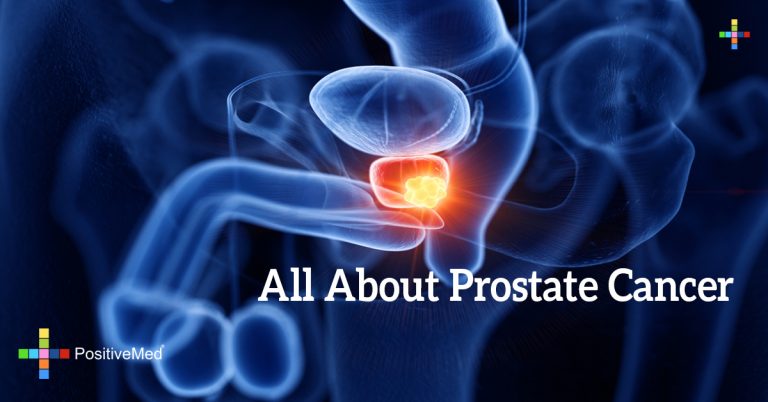 All About Prostate Cancer
BY Positivemed-Team Costa Rica Office
Edited By: Stephanie Dawson

In developed countries prostate cancer is among the top causes of male mortality, only exceeded by lung cancer. Treatment and preventive measures have shown great effectiveness in reducing rates of this malignant disease.

The prostate is a gland in the male reproductive system that has the shape and weight of a walnut. It is located in the pelvis, behind the bladder and anterior to the rectum. The function of the prostate is to be a regulator in the process of draining the urine from the kidneys and to contribute to the creation of seminal liquid and other nutritious substances for maintaining sperm quality.

Cancer is the abnormal and disproportionate growth of cells. According to the characteristics of the cells, their growth rate, and morphology they can be divided into malignant or benign tumors.

Benign tumors are composed of normal cells with self-limited and organized growth (the process of duplication of the cell) In relation to prostate cancer, according to experts it is common in two thirds of total cases. The scientific name of this medical condition is prostatic hyperplasia. Manifestations and symptoms are known as prostatism and are related to the size of the prostate.

Malignant tumors are composed of abnormal cells (generally immature) described as a disproportionate growth of cells, that invade and destroy healthy cells as well. They can expand to other parts of the body trough the blood of the lymphatic system giving rise to new tumors, this is called metastasis.

Prostate cancer starts with some cells that multiply themselves without control until cover most part of the gland.

Symptoms at final stages of the disease:

Age is the most important risk factor. It’s likely 42% of the male population over 50 years of age will develop some histological evidence of prostate cancer and a mortality rate of 2.9% for this cause.

Genetics. There might be a high inheritability of this disease if your father or brother had it
Ethnic related. Prostate cancer is more common in Afro-American men than in Chinese or Native Americans in the United States.

Diet. A high fat diet, mixed with high intake of red meat, has been shown to be a risk factor in developing cancer, the same applies to tobacco and alcohol use.
Having a vasectomy is a not a risk factor

• Learn about super-foods and the importance of a healthy diet based on protective foods like broccoli, tomatoes, oily fish, flaxseed, green tea, and red wine. Quit smoking and abusing alcohol.
• Maintain a healthy lifestyle, regularly practice some form of exercise.
• Multivitamins might be recommended for people without any renal or prostatic condition.
• Always check with your doctor, particularly after you turn 40.