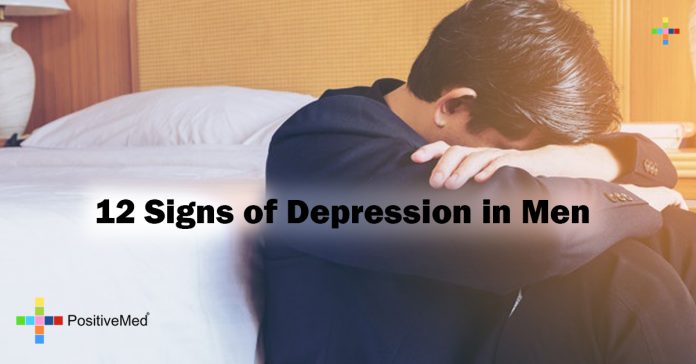 12 Signs of Depression in Men

Did you know more than 5 million men in the U.S. alone experience depression each year?

Clinical depression can cause sadness and a loss of interest in once pleasurable activities. While the symptoms used to diagnose depression are the same regardless of gender, often the chief complaint can be different between men and women:

People who are depressed undergo a series of physical and emotional changes. They can experience fatigue, as well as psychomotor retardation, or a slowing down of physical movements, speech, and thought processes.

2- Sleeping too much or too little

Sleep problems such as insomnia, waking up very early in the morning, or excessive sleeping are common depression symptoms.

Health problems such as constipation or diarrhea, and/or headaches and back pain, are common in people who are depressed.

Instead of seeming down, men who are depressed often show signs of irritability. Often talk about an emotional component, as well as negative thoughts are a common aspect of depression.

Psychomotor retardation can slow down a man’s ability to process information, thereby impairing concentration on work or other tasks.

Some men manifest depression by being hostile, angry, or aggressive. A man who realizes something is wrong may need to compensate by demonstrating that he is still strong and capable.
Stress

Men might be more likely to report symptoms of depression as stress. It’s not that they have more stress, it’s that it’s more socially acceptable to report it.

There is a strong link between anxiety disorders and depression. Men may be no more likely than women to experience anxiety, in fact, anxiety disorders are about twice as prevalent in women but it’s often easier for men to talk about feeling anxious rather than sad.

Substance abuse frequently accompanies depression. Research has shown that alcoholics are almost twice as likely to suffer from major depression as people without a drinking problem.

Depression is a common reason for loss of desire and erectile dysfunction, and its one symptom that men are inclined not to report. Performance problems can come from depression and make depression worse.

Some people naturally have a hard time making decisions, so an inability to make choices is usually worrisome only if it’s a new behavior