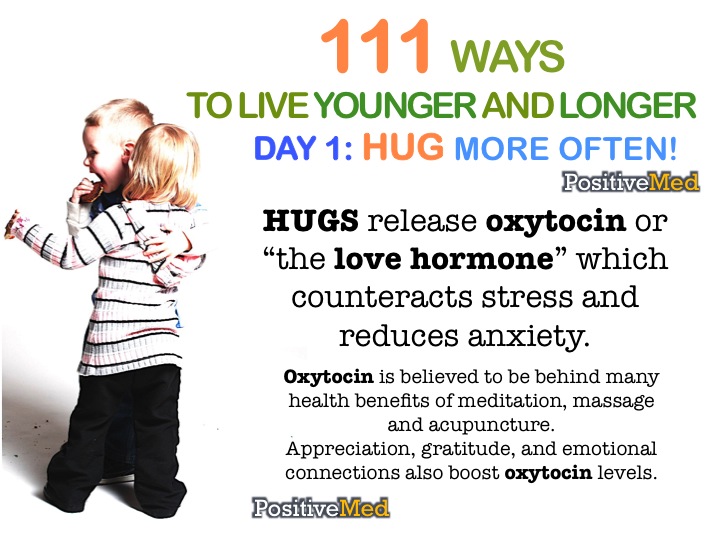 Here is the interesting fact: Hug, appreciation, generous touch, gratitude, and emotional connections with others raise OXYTOCIN levels in blood. Oxytocin is a hormone in mammalian brains (both male and female) and is best known for its roles in sexual reproduction, in particular during and after childbirth. It is released in large amounts during labor, facilitating birth, and after stimulation of the nipples, facilitating breastfeeding. Oxytocin counteracts stress and reduces anxiety effects and therefore, has a huge role in increasing quality and quantity of life. In addition, oxytocin appears to be behind many of the health benefits from meditation, massage and acupuncture.

Oxytocin is the reason why people with family support and people with pets tend to recover more effective and more quickly from illness, why married people tend to live longer, why support groups benefit those with cancer, addictions and chronic disorders, and why care-giving primate parents, whether male or female, live longer than the non-care-giving parents.

What drives our desire to behave morally? Neuroeconomist Paul Zak shows why he believes oxytocin (he calls it “the moral molecule”) is responsible for trust, empathy, and other feelings that help build a stable society. (Recorded at TED Global, July 2011, in Edinburg, Scotland. Duration: 16:35.)