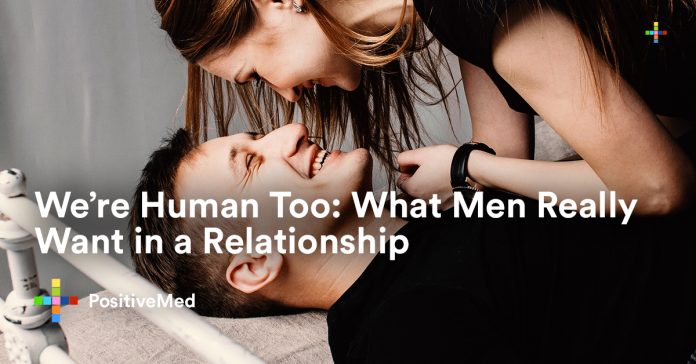 It may seem like men are from mars but when you get beyond the grunting and scratching, you come to realize that men are human too. Not all men are insensitive womanizers. In fact, most men want the same things that women want out of being together. Read the following for an eye-opening view into what men really want from a woman.

Men need and want a challenge, a partner that is assertive and helps their man strive to be a better version of himself. Like a video game you’ve completed or a math problem you’ve solved, any experience grows stale without a level of challenge. With challenge comes respect. You can’t respect someone who doesn’t challenge you or blindly accepts you no matter what.

It’s important to have a home team, a place to go and feel empowered and at peace. Men want stability in their lives. Sure, if you overhear a table full of guys at a bar, you may glean mention of bikini models and girls they dated when single, but men want the one special girl they can rely on each day. The thought or adventure of dating a variety of people may seem alluring, but it often leaves one feeling empty and ultimately alone.

Men want to see their young grow old and wise. Our species could not survive without the union of a man and woman. A family is a natural evolution of that initial attraction and connection. It may not seem cool to be ‘tied down’ to one woman or to a family, but that’s really the end goal of all of those nights going out and hoping to meet someone. As a man grows older, he wants to cultivate his own family and ensure a continued legacy.

In an era when there are websites devoted toward infidelity, it’s nice to have a partner you can trust. Who wants a broken heart or even worse, an STD from an unfaithful partner? It’s a typical male fantasy to have sexual relations with every attractive woman in the world, yet most recoil at the thought of being with a woman who has had many sexual mates or who cannot be trusted to remain monogamous. Men may have roving eyes but don’t be fooled; they can really appreciate being in a committed relationship.

Guys develop good relationships, which are often different from girl to girl relationships. However, over time, guys usually drift away from friends due to proximity, marriages, etc. Men often lose out on good male bonding relationships and are left with a void. Males can appreciate their girlfriends and wives filling that void. It’s a nice supplemental facet to the overall relationship. As often observed, those who start out as friends first, often develop solid intimate relations. Read more at A New Mode.

Guys can be awkward in making new friends as adults. Beyond friends made during their school years, it can be difficult for guys to bond. Therefore, meeting other couples allows guys to meet other guys in a more natural way. It allows them to have ‘guy time’ with other males while identifying as one-half of a couple. It’s a great way to remain social as one gets older. Otherwise, a single person could feel abandoned by married friends or alienated in trying to make friends with younger people.

Who wants to be alone as they age? Isn’t the thought of coming home to someone special a lot better than that of being alone or not knowing what lies ahead? Men like the sense of security that a healthy, committed relationship provides. Otherwise, a man can feel unsettled about the future. No one knows what the future holds yet being in a relationship provides peace of mind and a more secure feeling about the future.

Sometimes, we’re so close to ourselves to that we’re naive about the things we should improve or be proud of. Men need a good woman to make them more self-aware. Men want a woman to call them out on their bad habits while commending them on the things they do well. As the saying goes, ‘behind every great man, there is a great woman.’ Some people are better at self-reflection, yet it’s a great benefit to have someone close to you who loves you to illuminate your good and bad points. Men need a woman to serve as a supportive and perceptive mirror.

Thomas Goddard is a relationship therapist who enjoys writing articles that get things out in the open from a guy’s point of view when it comes to love, lust and long-lasting relationships.