Jenna Vecchio is an avid gym goer, so she was shocked when her gym told her she had to leave. This young woman from Orleans, Ontario, has publicly called out the Movati Athletic Club for their discrimination against her. Even though she was wearing attire similar to other women in the gym, Vecchio was told by gym staff that her unusual body shape made her attire look inappropriate.

The outfit that so greatly offended the Movati Athletic Club staff was a simple pair of full length, grey leggings, and a black racerback tank top. Vecchio notes that when she was in the gym on that day, there were several other women wearing almost an identical outfit. In fact, there are even several pictures of women wearing similar outfits on the website promoting Movati Athletic Club. Vecchio’s entire chest, torso, and legs were covered by the outfit, and the only bare part of her body was her shoulders and arms. However, Vecchio does have unusually large breasts, and she claims that she was singled out just because of her size.

When Vecchio was approached by an employee, she was told that her outfit was “offensive to both the staff and other members.” However, Vecchio asked all the other people in the gym if her clothing bothered them, and it turned out that the people who had a problem with it were just the two female supervisors working in the club. Vecchio knew that her clothing fit the Movati dress code, which just says patrons should wear modest clothing that includes suitable athletic attire and shoes. Therefore, she felt “humiliated and discriminated against due to my figure.”

RELATED ARTICLE: HERE’S WHAT ONLY 3 CUPS OF COFFEE A DAY CAN DO TO YOUR BREASTS

After sharing her story online, Vecchio has received an overwhelming amount of support from other women who have faced similar issues. The Movati Athletic club’s Facebook page is now filled with one star reviews and complaints from other people who think the gym’s decision was unfair. However, Movati continues to stand by the actions of the two supervisors who told Vecchio she had to leave. According to their side of the story, multiple members complained to the staff about the lack of coverage of Vecchio’s shirt. In the statement Movati Athletic Club issued, they said “while in no way did we mean to embarrass Ms. Vecchio, we stand by the original decision that confirms that Ms. Vecchio was dressed inconsistently with our code of conduct.” 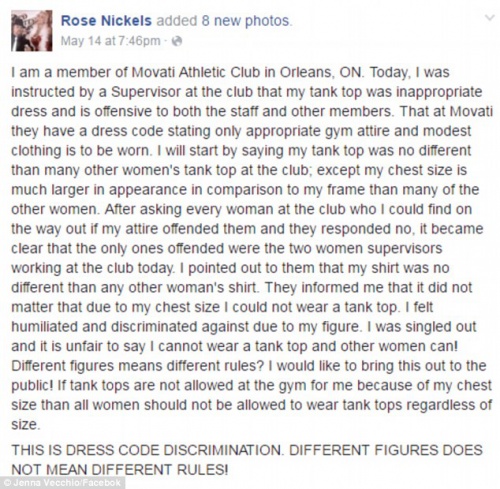 Unfortunately, Vecchio is not the only woman to face dress code discrimination due to her size. Many women with larger breasts get in trouble in offices or schools for clothing that follows the dress code. While their slimmer and smaller-breasted counterparts frequently wear certain clothing items, women with bigger breasts are unfortunately perceived as looking more $exual, even when their cleavage is covered. Some studies have even found that women with larger breasts are more frequently scrutinized and criticized for their attire, and they often get singled out among all the other women.

Though it is sad enough when this form of discrimination happens in the workplace, it can have lasting consequences when it comes to the gym. One study from the University of Portsmouth discovered that almost one in five women do not exercise because of their breasts. Many big breasted women surveyed by the study reported that public reactions to their breasts made them uncomfortable, so they were less likely to go to a gym. Since regularly exercising is critical for good health, it is important to stop this dress code discrimination.
[/nextpage]