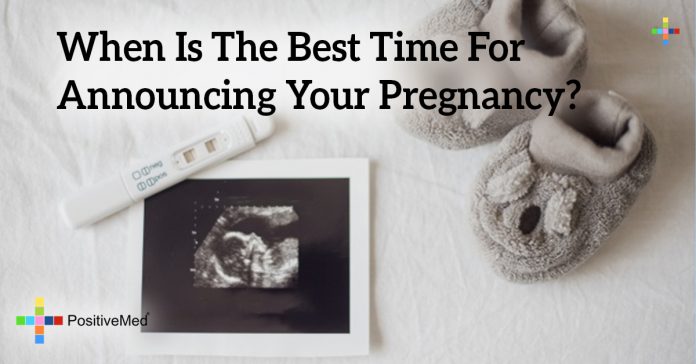 When is The BEST Time for Announcing Your Pregnancy?

Deciding when and how to share big news is always tricky to figure out, but when the news involves a new addition to your family the decision gets exponentially more difficult. With so many factors involved and so much disparate advice out there, how does a couple decide when the best time is to share their news?

The most well-known piece of advice floating around advises parents to wait until the end of the first trimester, or about 12 weeks, to announce that they are expecting. The main piece of conventional wisdom for this advice is that the risk of miscarriage drops dramatically after about 10 to 12 weeks of pregnancy, so it is thought that the new parents might want to wait to share their news until they are relatively sure they won’t lose the pregnancy. This is meant to spare the social awkwardness and disappointment for the larger community involved in the parents lives.

Another reason people may wait to tell others about their pregnancy until after the first trimester is that they want to delay the inevitable influx of (wanted or unwanted) advice and suggestions from family and friends. These intrusive recommendations can often stress out the parents-to-be, especially if it is their first child. They can also place a strain on existing relationships that make the entire pregnancy experience harder.

Yet another reason that someone might wait to announce a pregnancy is, unfortunately, concerns about employment and whether they will be able to keep their job after the news of the pregnancy is announced. This concern does hold more weight for women generally, as they are the individuals that will be absent the most from work with a pregnancy, but men could also face this anxiety. While it is illegal to fire an employee for being pregnant, many people fear that telling an employer too early in the pregnancy will results in loss of hours or duties at their job.

RELATED ARTICLE: 10 Bizarre Pregnancy Facts No One Warns You About

Of course, every argument has a counter argument, so there certainly are some reasons that announcing your pregnancy early might be beneficial. For example, if one of the reasons for delaying the announcement is to spare the awkwardness of a miscarriage from the rest of your community, you could also argue that the delay means the parents suffer this loss alone, instead of with their loved ones. This could be psychologically damaging to the prospective parents and could be just as traumatic as the miscarriage itself. Further, there are steps individuals can take to drastically reduce the chance of a miscarriage in the first trimester, so perhaps the risk isn’t that great to begin with.

Similarly, telling your community of loved ones early in the pregnancy gives them all an opportunity to share in the joy of the experience with you for a longer period of time. Even though unsolicited advice may be an annoyance, many new parents can’t imagine going through the process without the support and involvement of certain loved ones. Waiting until the 12th week significantly cuts down on the time that everyone can celebrate together, which could feel isolating for the new parents.

The anxiety surrounding loss of employment or duties at a job is a harder concern to address for many parents. There may not be much you can do to alter the behavior of an employer who is hostile towards pregnancy and parenthood, but it can still be argued that earlier is better than later in this circumstance because it gives the new parent plenty of time to improve their employment situation. Also, pregnancy women are encouraged to reach out to local legal resources if they feel their job is being threatened by their pregnancy.

So when is the right time to tell people you are pregnant? The decision is obviously not an easy one, but it is ultimately a personal one. Each, parents, must decide for themselves what is right for their situation and their community.