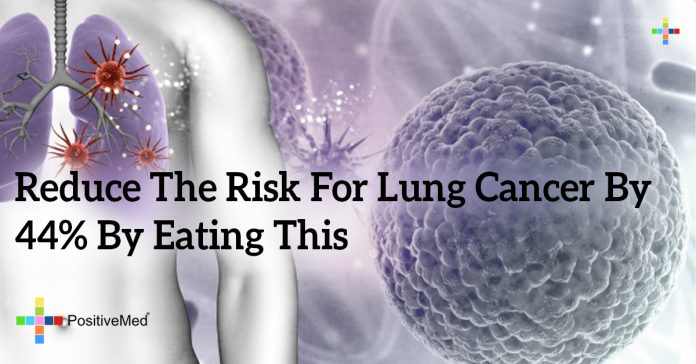 Reduce the Risk for Lung Cancer by 44% by Eating THIS

Although garlic enhances the flavor of many food dishes like shrimp scampi and spaghetti sauce, the tiny white clove has somewhat of a bad reputation. One rumor is that garlic’s odor is so strong it can keep vampires away. We know it can prevent first dates from leading to second ones. But now there’s good news on the garlic front: scientific studies show that garlic can play an important role in fighting lung cancer.

Studies have long shown that smoking is one of the main causes of people developing lung cancer, but non-smokers can contract the insidious disease too. It’s important for people to learn all they can about ways to protect themselves from the malady.

A new study by Chinese scientists links the consumption of raw garlic to a reduction in lung cancer by up to 44 percent. Researchers conducted interviews with 1,424 cancer patients and 4,534 healthy control subjects to find out about their lifestyles and diets. Garlic, in particular, was studied in terms of who are it and how often.

The study concluded that the effective compounds in raw garlic in lung cancer chemoprevention were strong enough to warrant deeper investigation. They concluded that diallyl disulfide, an organosulfur compound derived from garlic and a few other genus Allium plants, may be the root cause of garlic’s lung cancer preventative potential.

As past studies have shown conclusively, the study showed smoking was once again shown the major cause of lung cancer. The study indicated smoking increased the chance of contracting lung cancer over nonsmokers by 250 percent. Other contributing factors in the Chinese study included exposure to nearby factory smoke and fumes, the consumption of fried foods and family lung cancer history

Compared to people who never ate raw garlic, those who ate raw garlic at least twice a week for a total of 33 grams weekly had a huge 44 percent lower risk factor. A weekly garlic consumption of 33 grams amounts to 10 to 30 gloves, depending on the size. One important fact discovered in the study was that eating garlic more than once a week was crucial. Those who ate the raw gloves only once the week showed only a 8 percent reduction rather than the 44 percent number.

Even smokers benefited by eating raw garlic twice a week. The study showed they had a 30 percent lower risk of contracting lung cancer than smokers who ate no garlic.

Scientists suggest the medicinal powers of garlic are derived from several sulfur compounds locked inside the glove. When raw garlic cloves are crushed or chopped, the oils that contain the beneficial compounds are breathed in and mostly excreted through the lungs while eating. This could be the reason why garlic may specifically protect the body against lung cancer.

Laboratory studies have also shown that the compounds in garlic, including allicin, can kill human liver, colon, and gastric cancer cells. Studies in animals even suggest that garlic can provide some protection against other human cancers like breast cancer and lymphoma.

Undoubtedly eating raw garlic is unpleasant at first, and it takes an acquired taste in order to get used to it. For the Chinese study, however, only the consumption of raw garlic was studied.

There are ways to overcome the strong taste of fresh, raw garlic by incorporating it into your diet with other healthy foods.

Chopped raw garlic added to fresh salsa and bruschetta makes a great salsa. Combined with avocados and their healthy oils, you can make a guacamole people will rave about. Add chopped garlic to hummus. Or you can add chopped raw garlic to your salad dressing of choice. Adding the garlic to all of these dishes just before serving them maximizes
the aromatic benefits of the garlic to the lungs

The trial results show that for now, eating raw garlic is one way to go in helping to avoid lung cancer.