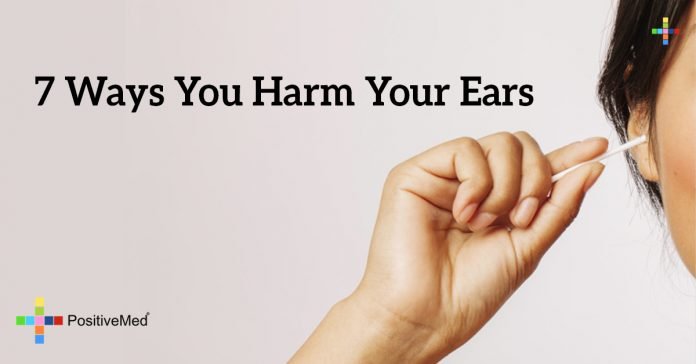 7 Ways You Harm Your Ears

With approximately 15 percent of American adults reporting trouble hearing (National Institute on Deafness and Other Communication Disorders), it’s good to know what you can do to avoid ear problems yourself. It’s shocking how many ordinary habits may lead to partial or complete hearing loss. How many of these things do you do each day?

Neglect to Protect
Over-exposure to loud noises in the workplace or during recreational activities can have devastating effects. Sounds such as machinery, car engines, fireworks, artillery, or even music can damage the tiny hairs in your ears that serve as hearing receptors. It is strongly recommended that you wear earplugs to shield you against noises at or above 85 decibels. If you do not defend yourself against such commotion, sounds may become muffled or distorted, eventually leading to tinnitus or noise-induced hearing loss.

Sports Participation That Leads to Mutilation
Auricular hematoma, or “cauliflower ear,” is a deformity of the ear which occurs after a significant blow to the head. If this malformation goes untreated, it will block blood flow and damage ear tissue. The best way to prevent this tragedy is to wear proper headgear while participating in close-contact sports.

Damaging Piercings
Studies conducted by Oregon health officials reported that of 118 youths with pierced ears, seven developed infections caused by Pseudomonas aeruginosin bacteria and 18 more were suspected to have the infections.

None of these concerns resulted from earlobe piercings, however; only children with cartilage piercings were affected. Perhaps cartilage piercings aren’t such great fashion statements, after all, particularly when they’re accompanied by redness, swelling, and tenderness. When in doubt, take them out.

RELATED ARTICLE: See What Happens When You Massage This Point on Your Ears!

Pro Tip: No Q-Tips
Nearly four percent of ruptured eardrum cases are caused by Q-tips. The package explicitly states not to stick them in your ears. Even if you don’t rupture an eardrum, this method of cleansing can scratch the ear canal and cause bleeding or infections. If you must clean your ears, it is recommended that you simply wipe the outer ear with a damp towel. To drain earwax, you may use a hydrogen peroxide solution, but avoid doing so too frequently. Earwax is intended to keep the ear canal clean.

Patience is a Virtue—And a Culprit
If your hearing ever arbitrarily fades in one or both ears, don’t wait around for the issue to resolve itself. Your ears are delicate instruments that deserve special attention and immediate medical care if need be. Good things come to those who get up and get help.

Stop with Eardrops
No ear troubles should be treated at home, particularly not with over-the-counter ear drops, white vinegar, or rubbing alcohol. Only a trip to the doctor can determine whether your swimmer’s ear is actually a perforated eardrum in disguise. Foreign ingredients in the ear can lead to permanent deafness, even if they seem to be part of a reliable home remedy.

Ascend to Greatness…But Not Too Quickly
Ascending at a rate of 60 feet per minute or faster while diving can result in barotrauma. Don’t do it. In fact, avoid diving with an upper respiratory infection and flying with a cold as well, as it can be difficult to equalize the pressure in your ears. Barotrauma can lead to ear pain, dizziness, tinnitus, or partial or total hearing loss.

So, how many of these risk factors have you partaken in? Now that you know the dangers, avoid them and give your ears the special treatment they deserve.