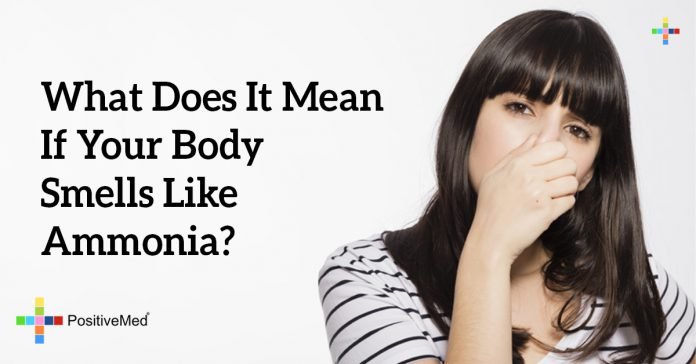 What Does It Mean If Your Body Smells Like Ammonia?

If your body smells like ammonia, it means you could be suffering from a rare condition called ammonia toxicity.

Unfortunately for most, the ailment is never discovered. Sufferers operate under the assumption they simply have a strong body odor. They try hiding it under antiperspirants, deodorants, colognes and perfumes. They bathe constantly to no avail. Many minimize close contact in social situations, or merely suffer the stigma of people knowing they emit an unpleasant smell.

As you can imagine, this condition is far more than a physical illness. Ammonia toxicity wreaks havoc on the mental and neurological systems.

What is Ammonia Toxicity Exactly?

It’s a by-product of the digestion progress that involves proteins and fats creating ammonia in the body. It’s also common in athletes who release something called “ammonia sweat.” That’s a natural way of providing sugar to the body. Both these acts can lead to high levels of body odor. Another factor is an overproduction of cortisol, often due to extreme stress.

Normal levels of ammonia help the body. The intestinal tract needs ammonia to produce urea. But problems in the process can result in inadequate detoxification until too much ammonia gets in the bloodstream and results in ammonia toxicity.

What are the Symptoms?

Most sufferers of ammonia toxicity never get treated because many never discover the issue. Blood work ups can reveal the condition, but only if the clinicians look for it. Even experienced lab technicians may not be familiar with functional ammonia toxicity.

This means your understanding the condition, which, besides excessive body odor, can include:

Where Bodily Ammonia Comes From?

It’s not unusual for public water systems to use a combination of ammonia and chlorine to clean the water. Consumption of water from sinks and fountains can contribute to the condition.

RELATED ARTICLE: Follow Her And Try This Safe Natural Deodorant Hack Straight From Your Fridge

Another source of ammonia is fast food meat. In fact, almost three-quarters of processed meat have some form of ammonia as it is used to minimize the threat of bacteria, including E. Coli and salmonella. Any meat processed in this manner has the potential of leaving ammonia in the blood stream.

Most ammonia is naturally detoxified, but there are forms of bacteria that can increase the production of ammonia. Under normal conditions, the kidneys disposing of urea, which contains ammonia, in the release of urine. If there’s too much ammonia, it builds up in the bloodstream and overwhelms the liver. This greatly interferes with detoxification.

The Importance of the Liver

The liver is located on the body’s right side at the base of the rib cage. It has four lobes and blood from all parts of the body pass through it. This is where blood is purified, or detoxified, and properly metabolized before entering or returning to general circulation.

The liver also manages nutrients absorbed during digestion of food. The nutrients travel through the blood into the liver before reaching the heart for general circulation. When ammonia weakens the liver’s function, it can severely damage systems and lead to treatments like dialysis.

How to Manage Ammonia Toxicity?

There is no cure for ammonia toxicity. There is only management of its conditions and minimizing its threats. A good clinician will be able to counsel you on the following:

Not all body odors are a sign of ammonia toxicity. But if you are suffering from symptoms associated with ammonia toxicity, you need to find a doctor familiar with treating the symptoms that can lead to even greater health risks.