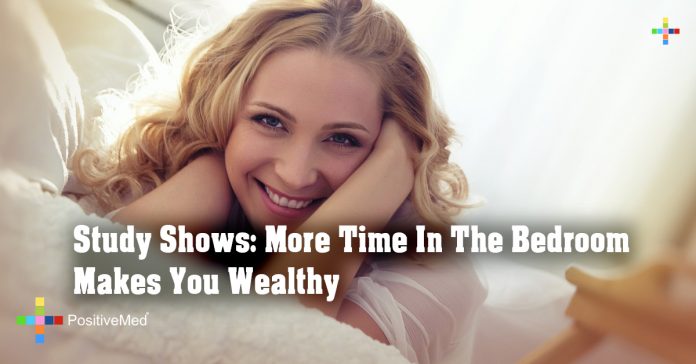 Study Shows: More Time In The Bedroom Makes You Wealthy

Just when you thought you had heard it all, a new study has shown that those who regularly get busy in the bedroom make more money than those who do not. The study examined 7,500 subjects in 2008 and looked at a wide variety of lifestyle factors in an effort to ensure that only the correlation between coitus and wages was measured. The results may surprise you, and encourage you to spend more time in your bedroom.

So just how often should you visit the bedroom? According to the study, those who engaged in a bedroom romp at least 4 times a week earned significantly higher wages than others. These people made 5% more than their peers. On the other end of the spectrum, those who took a pass on !ntimate relations made 3.2% less.

While people of all ages earned higher wages when they engaged in more frequent dalliances, the return on bedroom time investment was higher for those between 26 and 50 years of age. Though age was shown to matter in the study, orientation was not. Homo$exuals and lesbians were included in the sample pool, but this preference proved not to be a factor. Gay or straight, the wages for those who fooled around often were continuously higher.

In an effort to keep the results as accurate as possible, the study’s authors built in many falsification tests to ensure that unrelated factors didn’t skew the results. The following variables and more were all taken into account:

Even when accounting for these variables and others, the study results stood up to rigorous testing and questioning.

There was, however, one potential variable the researchers were admittedly unable to account for in their study which could introduce a small margin of error. This would be the chicken and egg paradox. The reality is that people’s attractiveness tends to increase with the size of their wallets. Dating can be expensive and those with more money may be more likely to date and attract willing partners, even if that attraction is enhanced for the wrong reasons. The study could not determine whether the money or the relationship came first.

Psychologists and other analysts are not at all surprised by the study’s findings. It has already been proven repeatedly that a healthy romantic life improves a person’s self-esteem, personal happiness, satisfaction and cognitive ability. All of these traits are associated with productive, knowledgeable and skilled employees. Any activity, including !ntercourse, that promotes a happier and more emotionally stable person has the potential to positively impact their career advancement and earning potential. As The Huffington Post so aptly put it, “More physical love makes you healthier and happier. And happy, healthy people tend to make more money.”

RELATED ARTICLE: Foods from the Kitchen that Increase Your Appetite in the Bedroom

At the end of the day, there is no guarantee that spending more time in the bedroom will lead to a pay raise. It may, however, increase your odds of improving your life and job performance, which could eventually lead to more money. Guaranteed results or not, this author is certainly willing to give it the old college try.