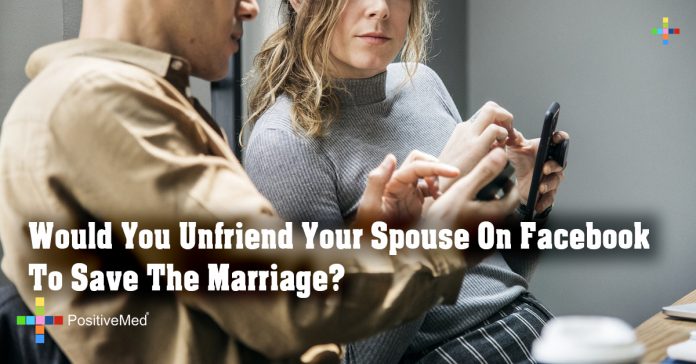 Would You Unfriend Your Spouse On Facebook To Save The Marriage ?

I bet if you think about it, you probably can name at least one person who ended their relationship over “issues” with Facebook. Whether it’s because the guilty party was spending too much time online chatting or looking up old flames (You know, just taking a walk down memory lane), it caused major issues.

In a world that is fueled by social media, it isn’t surprising that people are now blaming Facebook as one of the major causes of divorce. Although it sounds odd, in a world where people socialize online more than they socialize in person, it is easy to see why this could be true.

According to headlines in the UK, in one-third of divorces filed in the United Kingdom, Facebook was listed as a precipitating factor that led to the divorce. While it is understandable too much time online can be disastrous to a relationship, one might conclude that the problem boils down to the couple’s dynamics and not the ingenious creation of Facebook (Thank you Mark Z). If a couple is genuinely happy and stable, there shouldn’t be a problem with Facebook usage. On the other hand, if one or both of you are filling your free time on Facebook chatting it up with others when you should be devoting that time to your relationship, the problem doesn’t lie with Facebook itself but rather with the commitment and effort of the guilty party. In between adding and tagging friends, jealously rears its ugly head, and that is when things get messy.

For some unknown reason, it’s easier to start an affair online than in person. People are able to hide behind the screen and escape real life. They also have easier access to Facebook than if they were to go out and meet another person. Although this is true, the bottom line is that if people want to cheat, they will cheat. It doesn’t matter where, when or how.

On the other end of the rainbow, when both parties are on Facebook together, it can be a bit nauseating when they clutter your page with their mutual comments on pictures (which they were both in, but somehow it’s a big surprise, they need to shout out to the world they are in love yet again). Too much closeness can be a killer as well. If you are always connected to your other half, where is the mystery? A healthy relationship isn’t two people existing as one being, but rather two people who are whole and content on their own and share in something they created together.

Whether it’s Facebook, Instagram or Twitter, it seems kind of ridiculous to blame a computer application as the guilty party when good marriages go bad. Computers are sophisticated, but they don’t have the ability to do anything we aren’t telling them to. The real question is, if a kiss is just a kiss, is a poke just a poke on Facebook?

Evaluate your trust in your partner and their dedication to you. By assessing the current emotional investment and social dynamics of your relationship, you’ll be able to look at things with a more focused mind and get to the root of any problems you may be having.

So what do you think, friend or unfriend your spouse ? Let us know.