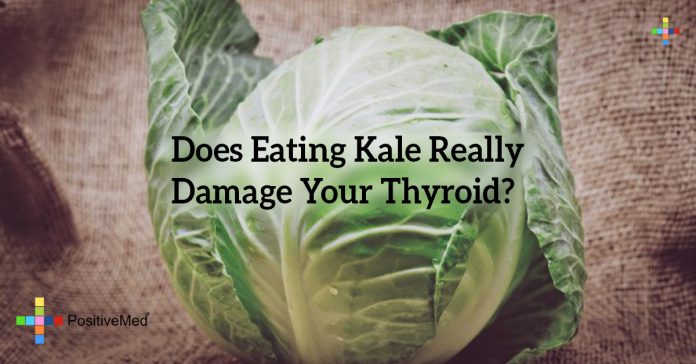 Recently, super-vegetable kale has come under fire for its potentially-harmful effects on the thyroid. While this “it” food is worshipped by many health-conscientious followers including celebrities, world politicians and average-Joes alike, it does fall into the cruciferous vegetable family, which means it contains goitrogens that can contribute to an oversized thyroid. Unfortunately for kale-lovers, these goitrogens can seriously impinge on the thyroid’s ability to produce hormones, which is the basis for the whirlwind attention the vegetable has been receiving lately in regards to its thyroid-damaging tendencies.

Lucky for us, there have been very little scientific findings to back up this idea that kale is harmful to the thyroid. In fact, we know it to be extremely beneficial to several of our body’s systems because it is high in magnesium. The theory that it could cause significant thyroid damage originated last year thanks to an opinion piece published in the New York Times that brought the risk to the forefront of the public mind.

Based on medical studies, there is little reason the believe there is a link between kale consumption and thyroid cancer. One study showed there is zero basis for that theory, while another suggested a possible link only in subjects whose dietary iodine intake is relatively low.

Kale: Good or Bad?
All this bad press was spurred by an elderly woman in China, who ate an unprecedented amount of kale for several months – up to 3.3 pounds of the raw, leafy greens per day! In her case, she was diagnosed with an extreme case of below-average thyroid function. It is worth noting, however,

that consuming lesser amounts of the power-food is not thought to have any connection to thyroid cancers, and furthermore, the practice of even minimal cooking can easily diminish any need for concern that these veggies will interfere with the thyroid’s functions.

RELATED ARTICLE: Kale, The Healthiest Vegetable on The Planet

If the sudden cloud surrounding these velvety greens has you feeling apprehensive, there are some steps you can take to ensure the kale you consume will not have any negative effects on your thyroid or the way it functions.

Cook your kale – By cooking your kale, or any other cruciferous vegetable, you dramatically decrease the potency of its potentially harmful goitrogenic properties.
The sole act of eating kale does not cause thyroid issues. It is when high amounts of kale consumption is mixed with an iodine deficiency that potential problems can arise. To avoid this, eat seaweed or some other iodine-rich food to ensure you meet your daily recommended dose.
Adding a Brazil nut into your smoothie can assist with iodine levels, as these nuts contain Selenium, which is known to support healthy iodine levels.
Eat a variety of greens instead of focussing on just one type. Eat kale one day and a non-cruciferous, non-goitrogenic veggie such as celery, zucchini, or carrots the next day. Alternate as often as you like.

Summing It Up
It is still perfectly safe to consume kale as a part of your healthy diet. The potential health benefits of kale and other cruciferous-containing foods are far greater than the unfounded, minor concerns that have circulated among the public recently. For maximum thyroid function, consuming large daily amounts of the raw, leafy plant is advised against. Equally important is paying attention to iodine levels, since unsatisfactory levels can contribute to a poorly functioning thyroid. Because these findings describe a food that is high in health benefits with relatively low health risks, I for one will continue to include kale as an integral part of my healthy meal plan. Will you? Tell us what you think.