PositiveMed The Positive Side of Medicine
Home health Alternative Medicine Can You Really Tap Your Problems Away? All You Need To Know About Emotional Freedom Techniques (EFT) 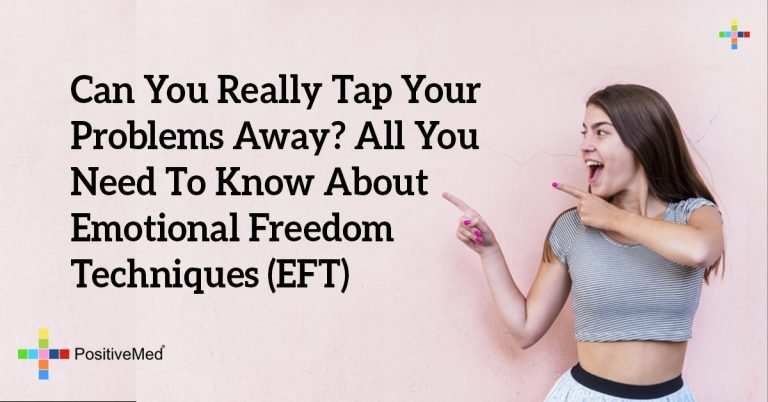 Can You Really Tap Your Problems Away? All You Need To Know About Emotional Freedom Techniques (EFT)

Emotional Freedom Techniques (EFT) is a deceptively simple but powerfully effective strategy anyone can use to eliminate negative emotions, anxiety, past trauma and more. It’s easy to learn, requires no special equipment and can be done anywhere, any time. Users swear it works, though it’s not quite clear how.

Emotional Freedom Techniques originated in the 1990s, and since then has blossomed into a worldwide self-help movement. EFT draws from a veriety of alternative “energy healing” therapies including acupressure, reiki and neuro-linguistic programming to help users free themselves of negative emotional states trapped in the body.

EFT has two parts: affirmations and tapping. A typical EFT session involves tapping various parts of the hands, face and torso while reciting affirmations related to the targeted emotional state. For example, a person suffering from anxiety might say, “I feel anxious and scared but I’m OK” while tapping the key EFT points on the back of the hand and other target points.

EFT works, according to practitioners, by stimulating energy points that relate to particular psychological states. By repeatedly y tapping those points while repeating an affirmation, they say, those negative energies are released from the psyche through energy pathways that run throughout the body. Small psychological issues can be resolved with a single round or two of tapping, but deep-seated issues may take several.

Because of its popularity, EFT guides, tutorials and classes can be found virtually everywhere. EFT groups on social media sites offer places for users to connect and share insights and tips, and many alternative health practitioners incorporate EFT into their work with clients. Video tutorials offer the easiest way for beginners to get started, with clear easy to follow demonstrations and suggested affirmations to accompany the tapping. Numerous guides available online and in print also offer suggestions on creating affirmations and tapping sequences aimed at specific psychological problems.

Though EFT seems like an easy and effective way to eliminate a variety of nagging emotional problems, mainstream medicine remains skeptical. Recent clinical studies on EFT and similar procedures for alleviating fear and other negative emotions found that the effectiveness of EFT is due to the placebo effect – it worked because users believed it would work. A 2013 study front Clinical Psychologist noted that the reasons offered by EFT advocates for how it works are vague and impossible to evaluate, and that there was no reason to study it further.

EFT may not work from a clinical viewpoint, but can it be harmful? Psychologists warn that those who use EFT to eliminate serious psychological issues may need the support of trained professionals to handle the feelings and memories that surface. And using EFT as a substitute for needed psychological treatment could lead to more serious problems. The technique itself is harmless, though – just about the only risk is tender skin from vigorous tapping.

Still, Emotional Freedom Techniques and related therapies continue to enjoy widespread popularity. While the reasons for EFT’s success remain a mystery, the long list of satisfied users is clear. For many, EFT remains a harmless and effective way to find relief from the stresses in their lives.