PositiveMed The Positive Side of Medicine
Home Lifestyle Relationship 8 Things Women Think Men Are Into, But They Are NOT 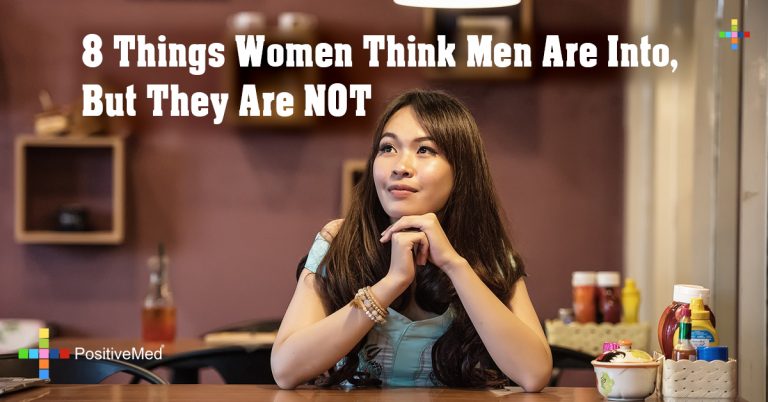 8 Things Women Think Men Are Into, But They Are NOT

Stereotyping is a window through which the world seems less complex. We use it as a reference point for how to relate to people. The problem with pigeonholing is that it doesn’t reflect reality. Typecasting ignores the wonderful fact that people are individuals. Labeling limits the expansive possibilities of relationship. Many myths exist about men that women mistakenly believe. Here we shine light on the shadows of misconceptions regarding men.

MYTH #1 – Men are unemotional. Though a man may not get misty while watching the movie “Ghost,” it doesn’t mean he isn’t moved. From childhood, boys are taught that showing emotion signals weakness. So they learn to wear a macho mask. They hide their feelings and are less verbal than women. In fact, a word count study showed that women say 25,000 words a day while men utter 12,000.

INSIGHT #1 – A man may shift his emotions into an acceptable gear of expression. For example, sports events are safe places where men give free rein to their feelings. Players don’t hesitate to indulge in exuberant high-fives and hugs.

It isn’t that fellows are unfeeling. They’ve been trapped by societal beliefs that it’s unmanly to openly hurt, cry, or mourn.

MYTH #2 – A hot body is the main attraction in a woman.

RELATED ARTICLE: If You Feel This Way In Your Relationship You Know You Have Found Your True Soulmate

INSIGHT #2 – A stable, happy woman is more important to a man than appearance.

MYTH #3 – Men are incapable of commitment.

Although a man may be afraid to commit, it doesn’t mean he can’t. There may be many reasons for his reticence:

As further evidence of the capacity to commit, consider research results by The Huffington Post. Market analysts polled 250,000 men regarding dating, communication, romance, and marriage. When asked if they would cheat on their partner, 81 percent said they would never, even if they could sidestep being caught.

INSIGHT #3 – Men appreciate loyalty. They want to feel valued and loved. Once their fears are understood, they can be addressed. A man whose anxieties have been resolved won’t drag his feet on the path to the altar.

MYTH #4 – When he falls asleep right after making love, it means the relationship isn’t strong.

After lovemaking, a man’s body chemistry changes. Three hormones are released that usher in sleep. Prolactin, oxytocin, and GABA all trigger the need to conk out. For a woman, cuddling after coupling increases the sense of closeness. For a man, it requires effort to stay awake and snuggle.

INSIGHT #4 – When a man immediately nods off after lovemaking, it means he’s happy and satisfied.

In the past, women who took the initiative to ask for a date were seen as desperate. Men were charged with doing the hard part of making first contact. Thankfully, dating etiquette has since evolved. Match.com has released the results of its “Singles in America 2015” survey. Polling 5,600 singles revealed that 90% of the guys were fine with being asked out.

INSIGHT #5 – Members of both genders like being approached for a date. It’s a sign of being admired. Fortunately, no one objects to that.

The Romantic Beliefs Scale has dispelled this myth. This is a measure of viewpoints regarding the nature of love. A study of 730 subjects assessed four core beliefs about romance. The results showed that men were generally more impassioned than women. Guys agreed with such statements as:

INSIGHT #6 – Men tend to believe that love is the most important consideration in choosing a mate.

In his book Backbone, David Wagner states that each man has an inner life. It includes his dreams, hopes, passions, and aspirations. Clues that reveal what’s close to a man’s heart are:

INSIGHT #7 – There’s a lot beneath the surface of that calm exterior.

MYTH #8 – Men don’t need to talk about their feelings.

We’ve already nixed the myth that men don’t have feelings. However, in addition to having emotions, men need to express them. Male bonding occurs in the form of:

INSIGHT #8 – It’s important to not begrudge men the time they spend with buddies. Men need to bond as much as women.

A BREATH OF FRESH AIR

To recap, let’s clear the air of the above-mentioned myths. Acknowledging men for their positive traits, we can say they:

1. Have emotions.
2. Are more attracted by a woman’s personality than her looks.
3. Enjoy being committed.
4. Fall asleep right after love-making due to changes in body chemistry.
5. Don’t think less of a woman when she initiates a date.
6. Are more romantic than women.
7. Have an inner life.
8. Need to express their feelings.

Considering the above endearing qualities, we come to a happy conclusion. Ladies, when it comes to men, you can’t help but to love them!