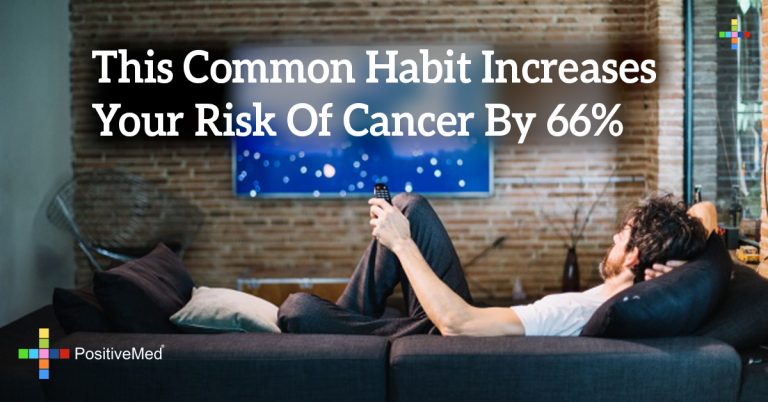 This Common Habit Increases Your Risk Of Cancer By 66%

According to the Nielsen Corporation, the average American watches over 4 hours of TV a day. The average household has 2 televisions that are left on almost 7 hours a day. Psychologists at Rutgers University have found that television shows are designed to be addicting through cliff hangers, gender and violence and constant rapid fire scenes that hold the attention. While television can be entertaining and educational, it also has negative side effects.

A new study published in the “Journal of the National Cancer Institute” shows that people who spend more time sitting increase their risk of developing certain types of cancer by 66 percent. The researchers reviewed 43 studies and found that there was an undeniable correlation between sitting and watching TV and cancer rates.

Leading cancer expert Dr. Graham Colditz, of Washington University School of Medicine, noted that being active, while still also sitting a lot, is still unhealthy. In fact, the study found that individuals who regularly exercised, but also spent a lot of time on the couch watching television, has higher rates of cancer compared to those who rarely sit. In addition to this, researchers have found that TV viewing often goes hand in hand with eating junk food, soda pop and processed food.

Research by the American Cancer Society (ACS) has found that women who sit for more than six hours a day increase the risk of death by almost 40 percent, while men increase their risk by almost 20 percent. The ACS also reports that about 1.6 million cases of cancer are expected to be diagnosed in 2015. Over one-third of all cancers can be prevented through healthy eating, staying active and maintaining a healthy weight.

In conclusion, sitting for extended period of time at home and at work greatly increases the risk of developing cancer and other health issues. Staying active and avoiding a sedentary lifestyle are the keys to wellness and longevity. Learn more physical activity ideas from the Centers for Disease Control and Prevention.