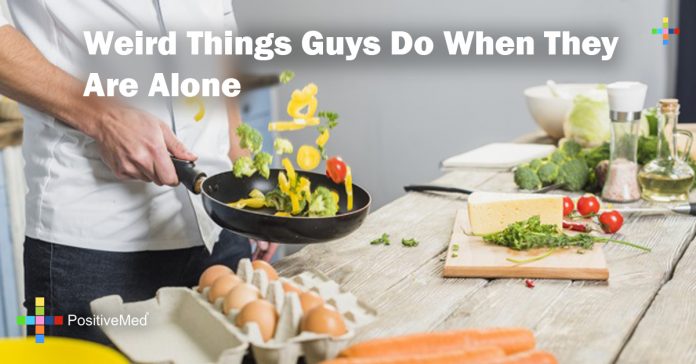 Weird Things Guys Do When They Are Alone

For guys, it can be easy to let their wild side come out when they’re alone and away from the rest of the world. From smelling themselves to raiding the fridge, there are a few ways that they spend their time when everyone has left the room. Although women may not understand men, they continue to do a few weird things even when they’re alone.

Raid Their Own Room

Guys are curious about what they own and can easily forget what they’ve left in their closet or have hidden under their bed. When guys are alone and have some spare time, they’re likely to go through their childhood baseball cards, play an old video game from when they were a teen, or even read a few books that were under an old pizza box. Although they may not actually clean the room, they’ll be sure to explore the contents before moving on to another activity.

Although girls are much more inclined to sit down for the latest episode of Keeping Up with the Kardashians, men are much more willing to also watch reality television when no one is looking. They often find the cat fights and drama interesting instead of putting on the game.

Although selfies are often better left to the girls, guys can’t resist the temptation to see how they look on camera and even save the images to their phone. For anyone who has ever walked in on a guy when he’s alone, they’ve likely seen him doing the duck face or trying to look macho with in front of his smartphone.

Instead of waiting for someone to make him food, a man is much more likely to raid the back of the fridge and find a few ingredients that aren’t too far past their expiration dates when he’s hungry or bored. From making tortilla chip pizza to creating a candy and ice cream mud pie, he isn’t ashamed to explore new flavors and eat the whole thing.