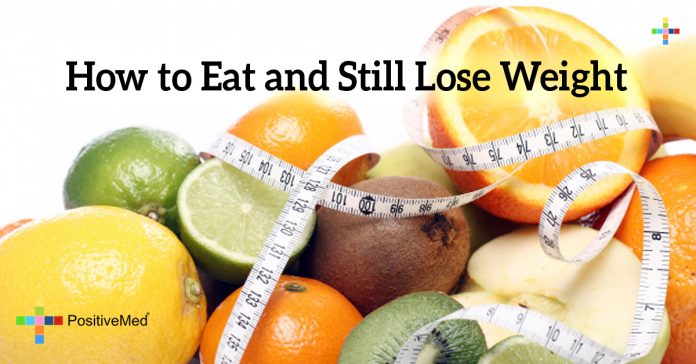 How to Eat and Still Lose Weight

It’s a long held belief that eating fewer calories and exercising more leads to weight loss. However, plenty of individuals follow this formula, but they still struggle to lose those pounds and fit into their favorite pair of skinny jeans.

Recent studies have shown that not all calories are absorbed in the same way within the body. Generally, diets high in carbohydrates slow the metabolism while diets high in fat and protein increase the metabolism. Similarly, high glycemic foods like sugar, bread and potatoes stimulate hunger and cravings, which makes dieting more difficult. While individuals may lose weight in the simple formula of consuming less calories and exercising more, eating a healthy, balanced diet of mostly unprocessed food may be easier to stick to and will keep the weight off in the long term.

Dr. David Ludwig, the director of the obesity program at Boston Children’s Hospital, conducted a study in 2012 on the effects of certain foods for weight loss maintenance. His study revealed that most people who focus on calorie restricted diets fail.

This is because many people who focus solely on calorie restriction end up eating low calorie, highly processed foods that slow the metabolism and stimulate hunger. Moreover, those 100 calorie labeled snacks may be hindering weight loss. Another study lead by Dr. Dariush Mozzaffarian at Harvard Medical School rejected the idea that human beings gain weight by consuming more calories than they expend, after studying the effects of different foods on weight gain. His study concluded that while 100 calories of fat, protein or carbohydrates are equal in a thermodynamic sense, the way these nutrients influence the complex human body and how it stores fat is not the same because certain foods aren’t absorbed equally. For example, the Harvard study found that foods rich in fiber like nuts and vegetables had only 75 percent of their calories absorbed while the rest were excreted from the body and left unused.

Finding the right diet plan to lose weight not only involves restricting calories but also deciding on what foods to consume. The best diet plan will include a balanced diet of unprocessed whole grains, healthy fats, lean protein and natural fiber. Moreover, the balanced plate approach should ideally be composed of 25 percent protein, 25 percent unprocessed whole grains and 50 percent natural produce.

Below is a list of foods that are rich in nutrients and aid weight loss:

Given the rise of obesity in recent years, science has begun to reevaluate guidelines for weight loss and questioning the way calories are absorbed. The best way to achieve weight loss is by eating a well balanced diet in a calorie conscious plan along with exercising at least three times per week for one hour. Eating healthy will also reduce cravings and assure the body gets a healthy dose of daily nutrients, which will make dieting easier.