7 At Home Remedies You Should Never Try 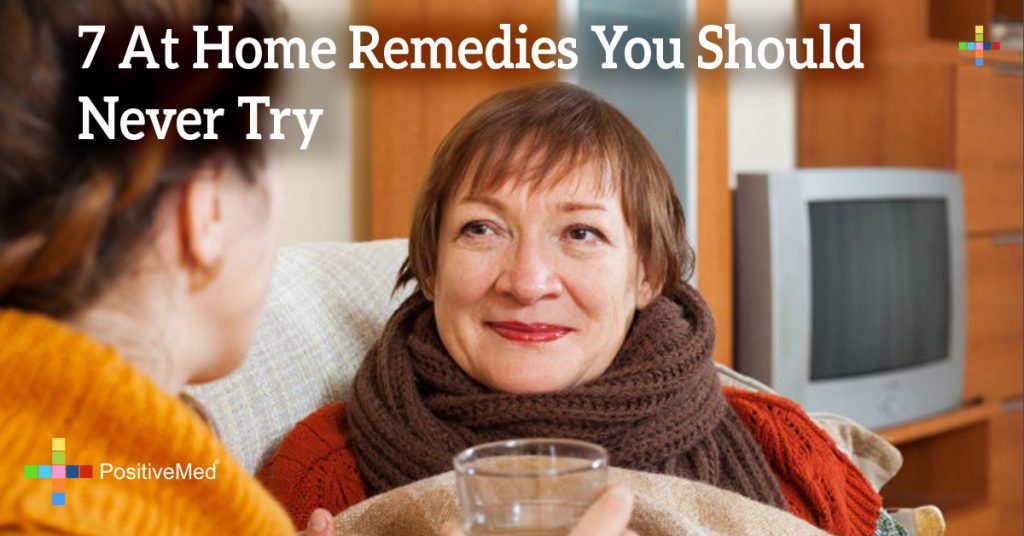 7 At Home Remedies You Should Never Try

There are several home remedies for a variety of different things. Although some are brilliant, others are a little suspicious.

1. Whiskey for a Teething Baby

When babies start teething, inflammation begins to occur beneath the gums. Babies deal with this pain by being cranky and not sleeping. So, parents try the old home remedy of rubbing the baby’s gums with whiskey, because if a baby cannot sleep, might as well get them drunk. Although it is true that the amount of whiskey used cannot intoxicate the child, it is safe to say that enough times may cause them to get a little woozy. The main issue behind this remedy is that whiskey will numb the pain for awhile but does nothing to reduce the inflammation.

2. Butter for a Burn

People have found butter to be a lot more useful than just a topping for their toast. Butter has been used as a tightly wound ring remover, skin treatments and even to train a cat. One of the more dangerous home remedies that involves butter, however, is using it to heal a burn. Butter will soothe the pain of a burn temporarily, but it has no healing qualities. A burn is an open wound, so slathering butter over the top of it can be a huge risk for infection due to the fact that it is unsterilized.

If someone wants to pucker up, a sweet kiss is a lot more enjoyable than sucking on a lemon. Some have thought that biting into a lemon whitens the teeth. While it is true that teeth may appear to be whiter due to the acidic in citrus, it causes a lot more damage than improvement. Too much citric acid against the teeth causes erosion of the outer enamel, which causes sensitivity and tooth decay. So, teeth may be white for awhile, but it will not be long before it decays into a spotty brown.

4. Matches to Remove Ticks on Animals

People use hot matches up against a tick to get them to let go. The method works, for humans anyway. The problem started when people started using the method on their pets. There is one solid difference between a dog and a human, dogs have fur and fur can light on fire. When people used the match method to conquer a tick while also trying to maneuver through fur, it would leave red welts and burns on the dog.

Earwax is gross and it is obvious that women will do anything to rid themselves of gross bodily functions. Ear candling removes the earwax using a candle-shaped cone inside the ear and lighting it on fire. Once the wick burns down, the user removes the cone, along with the earwax inside. Earwax has a purpose, believe it or not. It is a lubricant for the ear that helps make the inside of the ear water-proof and also guards against infection. Ear candling can also damage someone’s hearing. Deaf but beautiful, a worthy sacrifice.

6. Milk and Cabbage Gel for Back Pain

Mixing milk and cabbage sounds more like a German delicacy than a back pain reliever. Seems to be a constant theme in home remedies, the mixture will soothe pain temporarily, but it does nothing to actually reduce or fix the pain. The only thing someone will get in the end is the stench of old cabbage that has seeped into their skin.

7. Headband and Alcohol to Reduce a Headache
This remedy requires the user to soak a bandana in rubbing alcohol and then tying it tightly around their head to reduce a headache. It releases a cooling effect on the forehead that may be soothing but it does not relieve the headache. Rubbing alcohol can actually seep into the skin and cause nausea, while having something tightened around the head can actually make a headache worse.

Home remedies can be a life-saver, but they can also be a waste of time. Make sure they are invented in reality rather than stupidity before trying them out.