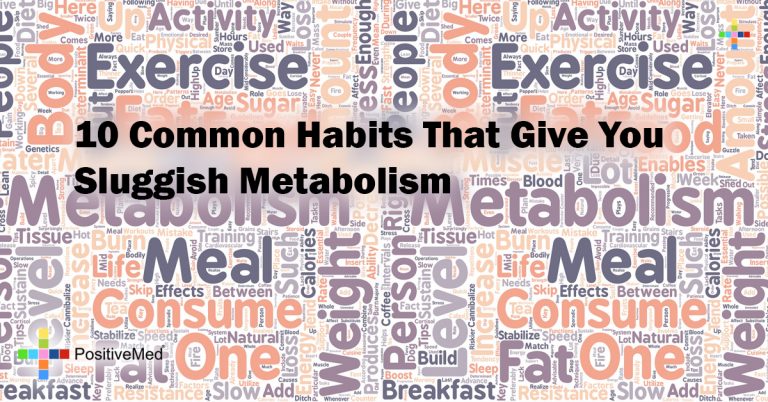 10 Common Habits That Give You Sluggish Metabolism

Having an extremely slow metabolism is one of the most common reasons why most people have a difficult time maximizing their weight loss efforts. Here is a comprehensive list of the 10 most common habits that give you a sluggish metabolism.

Most busy individuals unfortunately are the victim to eating once or twice a day. However, this is the ultimate killer of a fast metabolism! If you want to rev up your metabolism and continuously burn body fat, make sure you eat five to seven well-portioned meals throughout the day.

Anything less than eight hours of sleep a night is bad for your metabolism. If you find yourself not getting optimal amounts of sleep, try eating magnesium-rich foods or using a magnesium supplement to help put your body to sleep at night.

The body is made up over 70 percent water, so it should not be surprising you have a slow metabolism because of a lack of proper water intake. Active individuals should aim to drink at least half a gallon or more a day!

While dieting, it is necessary to cut back on calories, however, do not make the mistake of under-eating for weight loss. Extreme caloric restriction will slow down your thyroid and hypothalamus, causing your metabolism to act very sluggish. Make sure you incorporate a re-feed day in your diet at least once every one to two weeks.

Low carbohydrate diets have recently exploded in popularity. Scientists have long known that excessive carbohydrate intake leads to weight gain, nonetheless, going days without carbs will also slow down your metabolism. If you are going to cut back on carbs, instead of eliminating them from your diet completely, try carb cycling.

Meat has gotten a bad rap over the last few years, however, if you want to speed up your metabolism, it is necessary to consume a good amount of protein. Your body churns up its metabolic processes to digest protein. Also, protein speeds up muscle recovery and repair. Make sure you take in at least .5 to one gram of protein for every pound you weigh.

It is necessary to stay physically active for optimal health, nonetheless, spending hours in the gym can also slow down your metabolism drastically. Your thyroid gland is not going to allow your body to continuously burn thousands of calories. Over time, long bouts of exercise will trigger your thyroid gland to slow down your metabolism to avoid drastic weight loss. Maximizing your exercise by keeping your workouts to at least an hour.

Sure, cardio helps keep our hearts health, but it doesn’t help put on good amounts of lean muscle mass which is the key to having a high metabolism. Limit your cardio to around 40 to 60 minutes a day.

Try drinking at least a cup or two of coffee a day to speed up your metabolism. Studies have shown that caffeine helps individuals burn up to 15 to 20 percent more body fat compared to individuals that don’t consume caffeine.

10. Drinking Too Much Alcohol

Not only is alcohol filled with a lot of empty calories, but frequent alcohol consumption also suppresses hormones like testosterone, HGH and other metabolism-churning hormones. Limit your drinks to once or twice a week for optimal results.