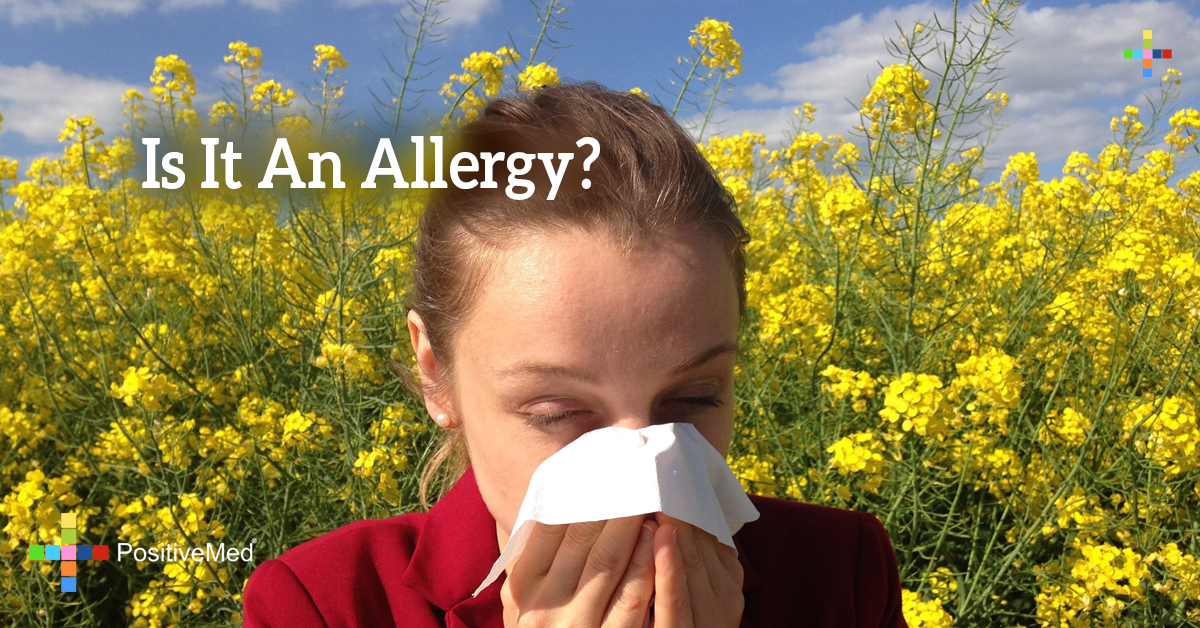 Is It An Allergy?

Wondering if your nagging cold is actually an allergy? Or what about your new skin cream that made your hands break out? Distinguishing an allergy from a non-allergic condition is not always a clear-cut task, but knowing the difference can sometimes help you solve what’s ailing you, which could mean faster relief.

Many people see just about any bad reaction to be an allergy, which isn’t surprising, since more than half of all Americans test positive for at least one allergen, according to the American Academy of Allergy Asthma and Immunology.

Technically speaking, a true allergic reaction happens when the body mounts an unusual immune response to something that’s normally harmless. Most allergy tests check for higher levels of antibodies known as Immunoglobulin E (IgE) in the blood, which are launched by the immune system to fight the invading substance.

Food allergies are one of the more regularly misrecognized types of reactions among people trying to self-diagnose. In general, it’s more common to experience food intolerance than an actual allergy. Although nearly 20% of adults claim they have a food allergy, studies show that only about 2% of adults have a true food allergy based on test results, whereas almost 30% of parents say they think their child has a food allergy, the actual rates range from only 6% to 8% among children under age 6.

Although you can’t always tell the difference between an allergy and something else for sure, here are some general tips to help distinguish an allergy:

Make a checklist of symptoms. Differentiating nasal allergy problems from cold or viral conditions spells relief for most people because nasal allergy symptoms (also known as allergic rhinitis) affects between 10% to 30% of all adults, but treatment can reduce those symptoms in Aabout 85% of those sufferers. If you’re not sure if you have one or the other, inventory your symptoms. If you’ve got sneezing; itchy, red, or watery eyes; clear nasal discharge; or your nose, throat or ears feel scratchy — then he says you’re probably dealing with an allergy.

Timing is everything. The duration and time of year the symptoms occur can be strong clues to identifying their root cause. If nasal symptoms get worse in the spring or fall when pollen counts are generally higher, it’s more likely to be an allergy.

It’s not just a gut feeling. With a food allergy, you’re not just looking for gastrointestinal symptoms like stomach cramps, diarrhea, bloating, or upset stomach – you’re also looking for a rash, or respiratory symptoms, something that goes beyond the GI tract. Why? Food allergies are usually a multiple system reaction. If just one organ system appears to be involved, it’s more likely to be something else, such as an intolerance, insensitivity, or even food poisoning.

Rule out brain and nervous system disorders. According to the National Institute of Allergy and Infectious Diseases, certain disorders often thought to cause food allergies either do not have enough research to support a link, or they have been disproven to be related. Among them are migraines, hyperactivity in kids, and certain disorders related to brain and central nervous system functioning — mainly characterized by symptoms of fatigue, nervousness, and trouble concentrating combined with headaches. So most likely, you can eliminate food allergies from the list of possible culprits for these symptoms.