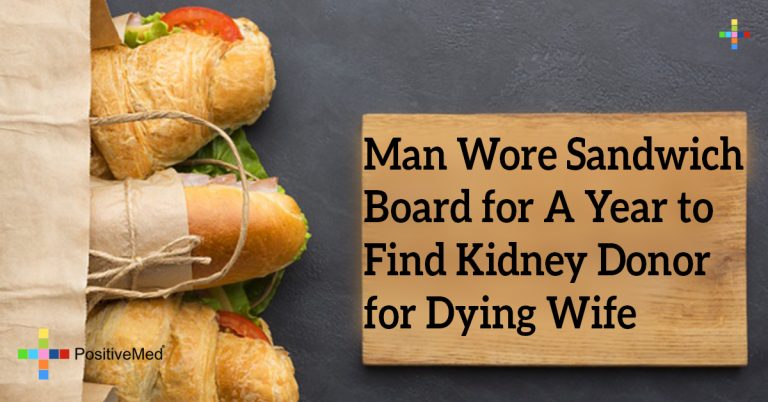 An American man, Larry Swilling, sets an inspiring example of true love. This South Carolina couple is so happy together that they don’t want to live without each other. Mr. Swilling promised his lovely wife Jimmie Sue, who had only one kidney, to get her a kidney that could save her life. Mr. Swilling is a 78 year old man who was so determined to get a kidney that he wore a sandwich board which had “Need Kidney 4 Wife” written on it, reported by Fox Carolina.

After carrying this board and walking the streets of his hometown in Carolina for about a year, he received news that the Medical University of South Carolina found a donor who could donate a kidney to his wife.
Jimmie Sue, 76, was born with only one kidney and was told by the doctor that she would need a new one soon as her existing kidney was failing to function properly. She did not have much time to live. Mrs. Swilling was not compatible to receive a kidney from her husband or three children so they had to wait for a suitable organ. Mr. Swilling could not imagine his life without his wife, they have been happily married for 57 years.

“I knew it was going to happen, because I know Larry. He wouldn’t stop until he got me one,” said Jimmie Sue, his proud wife.
The board Mr. Swilling was carrying listed his phone number so that people could contact him directly. His board got the attention of several people with the help of media and many people came forward to lend help but provided no match.

The determined man didn’t give up, he continued to search for a suitable kidney that could save the life of his loving wife. “I love her more now I believe than when I married her because we’re not two, we’re one,” he said. “We need each other.”
After a lot of hard work and several attempts, finally he got a savior, Kelly Weaverling, a retired Navy Lieutenant Commander who offered to donate one of her kidneys for this lifesaving operation.
The operation was conducted in September when Kelly Weaverling came forward after the final confirmation tests that took place in Charleston. The operation has been successful and the couple is so happy and grateful to Kelly Weaverling that they can not thank her enough for her lifesaving gift.

When Kelly Weaverling was asked what she had in mind when she took the step forward to help the couple, she said that she had to do something to help them, “It’s good to do something and give these people hope,” she said. The only thing that the flight lieutenant, Kelly Weaverling asked as her return gift was that Mr. Swilling to look after his wife.