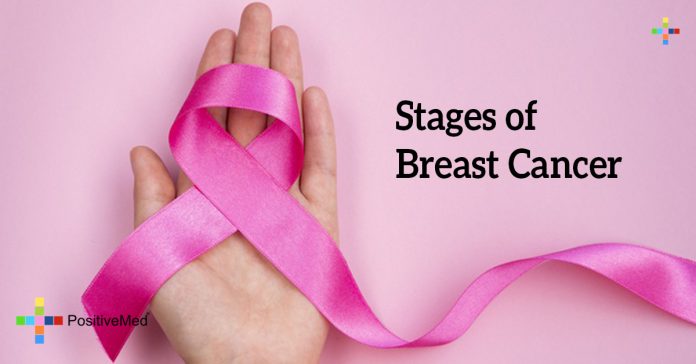 The stages of breast cancer are defined on a scale from 0 to IV. Stage 0 is the least dangerous and stage IV is the last stage and most dangerous. Stages describe the size, location, and severity of the cancer.

Stage I breast cancer refers to invasive cancer and can be divided into 2 parts.

Invasive cancer in which tumors are up to 2 centimeters in size and the cancer cells have not spread to other parts of the body.

In this stage there are no tumors. Small groups of cancer cells ranging from 0.2 mm to 2 mm in size are found on lymph nodes or there is a tumor in the lymph nodes.

Stage III is divided into 3 sub-stages

No tumor exists in the breast, cancer cells have reached 4 – 9 lymph nodes and have invaded the lymph nodes near the breast bone. Another interpretation may include a tumor larger than 5 cm, small groups of breast cancer greater 0.2 mm but smaller than 2 mm are present in the lymph nodes under the arms.

The tumor may be any shape and size invading the chest wall and spreading to breast skin causing swelling and ulcers. It may also mean cancer cells have spread to 9 lymph nodes and have invaded the lymph nodes near the breastbone. Cancer cells may also be found in the skin at this stage.

The tumor can be any shape and size and has reached more than 10 axillary lymph nodes, cancer cells have spread above and below the collarbone and all the lymph nodes have been invaded.

Cancer has invaded the entire breast and has reached other parts of the body including lungs, liver, brain, distant lymph nodes, and skin. Words such as advanced and metastatic are used to describe this final stage of breast cancer.

Cancer may be at stage IV in the first examination or it may be a result of reoccurrence of previous cancer that has invaded other parts of the body.