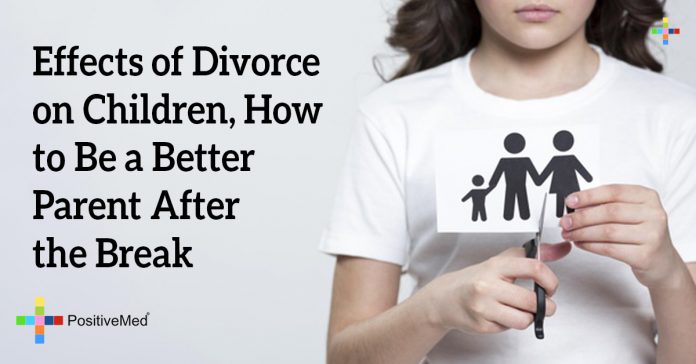 Effects of Divorce on Children, How to Be a Better Parent After the Break
By Posirivemed Team Staff
Edited By: Stephanie Dawson

Divorce is sometimes foreseeable and anticipated, some common characteristics of couples who get divorced are an extensive history of not getting along, emotional and physical growing apart, constant physical and/or psychological aggression, and high or distorted expectations towards one partner. Whatever the reasons for divorce parents with children expect cooperation from the ex-partner after divorce, which can be unrealistic. Almost everyone knows a story about someone who was badly affected by their parents divorce, no one wants that for their children, instead, we want a smooth transition. What can you expect in this stressful process? What are some recommendations to deal with this stressful and difficult process? Understanding the consequences of divorce in children is crucial for managing in the best way this difficult and stressful process.

Effects of divorce on children

• Divorce is a risk factor for children, it may limit the child’s emotional and economic resources from one parent, geographic mobility, and loss of contact with the parent that doesn’t have custody. These changes produce stress on children and may trigger a crisis within the family because of the new family structure.

• It seems that father-son disruption is seen by boys as cause for a series of disturbances, while the disruption of father-daughter may be interpreted as rejection, over the long term boys may develop behavioral problems while girls might suffer from self-esteem issues.

• The separation that divorce implies and the distance that grows between the parent that doesn’t have custody signify greater stress levels in parents, therefore, a lesser capacity of parents dealing with security needs in children, especially if there are economic difficulties which can create an even greater separation between the children and their parents.

• The age of divorce affects children: earlier separation implies difficulties in social and emotional areas, not in intellectual areas. Preschoolers might be prone to separation anxiety or social development disturbances, while school-age children are more prone to develop anger toward one parent, sadness, or psychosomatic pains and complaints.

Recommendations when children are in the middle

Joint or shared custody is the most common, it involves the designation of one of the parents as the principal and one as secondary, designating the primary home and responsibilities and often child support. In some cases custody is given to one parent, some studies shows that joint custody improves involvement of both parents, minimizing the negative effects of divorce in children.

Approval and attitudes between parents:

There must be some degree of confidence and approval between parents to facilitate contact with the parent that doesn’t have primary custody. When the parent who has custody disapproves of their children wanting to see the non-custodial parent there is a high probability of sabotage strategies and parents using their children to manipulate the other parent. Try to keep a healthy relationship with your ex, it’s beneficial to the children and makes life easier.

• It’s important to set schedules, visiting times, and to keep good communication with your ex, trying to focus on shared issues like discipline, what to do in case of emergencies, and how to arrange childcare when neither parent is present.

• Accept your child’s desires even if they are not yours

• There is no need to speak badly in front of the children about the other parent, if you think the other parent is doing something wrong tell him personally, don’t use kids as messengers

• There is no need to compete for children´s attention and love, love will come for itself.

• If there are severe communication issues and you don’t want to speak personally to your ex there is no need to stress, you can find a neutral person that carries messages, you can write emails or letters as well.

• Try to be consistent in visiting schedules, but be flexible, unexpected issues might arise anytime.