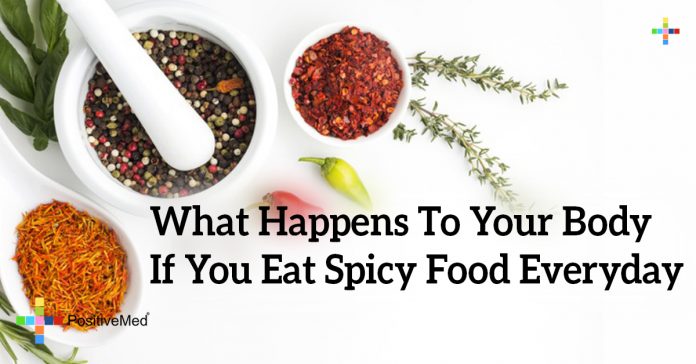 What Happens To Your Body If You Eat Spicy Food Everyday

Some of us tend to indulge and crave spicy foods. What if I told you that all these years of spicy food consumption may actually be adding time to your ticking “life clock”? Recent studies are suggesting that eating a range of hot and spicy foods are helping people live longer.

Studies are showing the possible links between regularly consuming spicy foods and the added health benefits as a result. A study was done by the Chinese Academy of Medical Sciences where the gathered data from 2004-2008. As a quick overview of that study, it was concluded that premature deaths had lowered by 14% if people had consumed spicy foods 6-7 times a week, versus those who ate them less than once a week. In addition, dried and fresh chili peppers were most common in this study. Below I’ve listed several spices and their health benefits.

Mainly used for cleansing and detox, while also helping digestion. It can be used for colds and the flu seeing as it helps clear up congestion as well as helping to ease coughing fits and sore throats.

Has a rich source of Vitamin C
Contains minerals such as:
potassium
maganese
Iron
Magnesium

Due to their intensity, Jalapeno’s should be eaten in moderation. With that being said, however, these peppers are known to hae a beneficial effect in patients with Alzheimer’s Disease by limiting neuronal damage in the brain.

RELATED ARTICLE: What Happens When You Eat Spicy Food During Menstruation

In addition to the spices listed above, there are a few other health benefits to add to the list. One being your risk of developing tumors decreases. Capsaicin, which is an active ingredient in many spices and spicy foods, activates cell receptors. It has anti-inflammatory and anti-oxidant properties. In a study where mice were the subject, 80 percent of prostate cancer cells were killed when the mice were fed capsaicin. These mice who had tumors were also fed capsaicin and in time, their tumors had shrunk to about one-fifth the size of the untreated tumors.

As stated before, by increasing the amount of spicy foods in your diet and/or adding spices to your foods, you drastically lower your chances of pre-mature death to due cancers and heart disease.

Have you ever gone out to a restaurant, looked at the menu, noticed there are wings on it, naturally you start to drool, and you notice they’re different levels of hot/spicy? It generally ranges from mild to suicide and you’re probably wondering how often someone is brave enough to eat the hottest of the hot, or the spiciest of the spicy? If so, I’m here to tell you to be a little more brave with your spices. They’re known to help with weight loss by having properties that speed up your metabolism.

How Bodies React To Spices

This is somewhat tricky. For someone who rarely eats spicy foods, or never, eating something with mild flavoring could give them alarming burning sensations throughout their mouth. Whereas someone who eats spicy foods regularly, they’re more tolerable to spices. One could almost compare it to working out. If you step into the gym for the first time, you’re typically not going to attempt to lift your body weight in weights. You have to condition your body to build up to that point. The same goes for spicy foods.

Can Extremely Spicy Foods Be Harmful?

The answer to this question can be yes or no. People who suffer from heartburn, various gastrointestinal diseases, bowel disorders, and ulcers should deter from cosuming spicy foods altogether because they can certainly irritate and makes these medical conditions worse. Each person reacts differently to different levels of spice so it’s important to figure out what works for you and what doesn’t.

In closing, there seem to be more benefits to spicy foods than there are cons. Spicy food can make some cringe, however after reading this article and gaining a bit of knowledge about the added health benefits, hopefully, those who were more closed minded became a bit more open minded when it comes to literally, “spicing up” their food dishes.