How You Can Spot FAKE Honey in Store 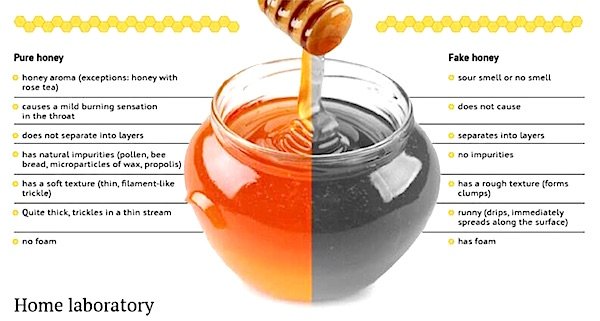 How You Can Spot FAKE Honey in Store

The next time you find yourself in the honey aisle of your favorite grocery store, thinking about which honey to buy; the pricey, premium, artisanal honey or the store-brand nectar contained in a plastic bear, you might want to think twice before choosing based on price.

Whether you’re glazing a ham, sweetening some tea, or just drizzling some on some toast or strawberries – honey is the best. Honey has been touted for its amazing effects outside of the kitchen, too, such as being an antibacterial and antifungal, being able to reduce ulcers, and help regulate one’s blood sugar. The Egyptians were particularly fond of it and archaeologists found 3,000 year old honey in a tomb that was still edible! However, not all honey is created equal and next time you find yourself reaching for that golden plastic bear, you may want to think twice.

A recent investigation of the honey market discovered that over 75% of all grocery-store honey was “ultrafiltrated,” which removes not only impurities such as wax and bee parts, but also all traces of pollen. It’s expensive and doesn’t significantly improve shelf-life, despite what manufacturers would like you to believe. What’s the big idea? Basically, honey laundering.

Pollen is the only sure-fire way to trace a honey straight to its source and ultra-filtering honey can mask its shady origins. Most likely, it’s been imported from China, where honey is cheap and heavily subsidized. However, Chinese honey is also subject to heavy import tariffs on account of its propensity for being contaminated by illegal antibiotics and heavy metals. Thus, Chinese manufacturers will ultrafilter their honey, then sneak their products into a US territory where it will then get slapped with a “Made in the USA” sticker and onto our shelves.

All of this funny honey is no laughing matter. It’s putting everyone who enjoys honey, either as a health benefit or simply as an alternative sweetener, at risk. So, how do you protect yourself?

Don’t eat the pre-packaged honey from KFC or McDonald’s, nor the “Winnie the Pooh” kind from Wal-Mart as 100% of these samples had no traces of pollen.
77% of honey from stores like Sam’s Club, Target, and Costco had no traces of pollen.
Know the source. Buy locally, whenever possible. Not only will this ensure your honey is legitimate, it’ll also help reduce your seasonal allergies by acclimating your body to the local flora through the ingesting of pollen.

If you can afford it, and are unable to buy local honey, Manuka honey from New Zealand is the only honey that has been approved by the FDA to treat wounds and burns and thus is most likely to be legitimate and good for you on several levels.

A USDA label doesn’t mean your honey is pure.

Things to keep in mind once you find honey you think is quality:
Real honey will not freeze.

Try putting a spoonful of the honey in a glass of water and stir; if it dissolves quickly, it most likely is fake.
Taste it. Can you taste more than one flavor or is it just sweet with a background of honey-like flavor?

Unfortunately, it’s impossible to simply look at a jar of honey and undeniably know that it’s the good stuff. There’s no law that requires a specific amount of real honey to be in a jar in order to be labelled “pure honey” and ultra-filtration isn’t required to be marked anywhere.