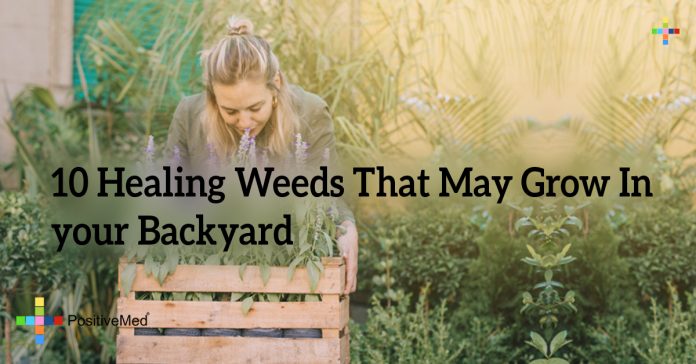 10 Healing Weeds That May Grow In your Backyard

People often kill weeds in their lawn and garden with toxic herbicides that are bad for the environment. Some weeds are actually healing weeds, they have healthy properties and nutrients usually missing in foods grown in depleted soil. Your backyard healing weeds can be a gold mine of healing and health! Here are 10 common healing weeds that may be growing in your backyard:

1. Chickweed
Chickweed makes a nice bowl of salad and is rich in nutrients that nourish the lymph and glandular systems. It has the power to heal cysts, fever, and inflammation. It also works as a neutralizer for those with over-acidic systems and is beneficial for those with overgrowth of yeast and fatty deposits.

2. Dandelion
The often-hated dandelions can be a diuretic. They are rich in potassium which is often lost through excess urination. You can apply it externally to treat eczema and you can drink it as tea to treat arthritis and intestinal problems. Its leaves help regulate blood sugar.

3. Rosemary
According to a recent study this member of the mint family has been found to reduce risk of Alzheimer’s disease due to its carnosic acid. The oils in it have antifungal and antibacterial properties. It improves circulation in the brain so it is associated with remembrance.

4. Milkweed
Per the U.S. Department of Agriculture milkweed has been used by Native Americans as a contraceptive. You can treat and remove warts using this medicinal weed. It also contains chemicals called cardiac glycosides that may cause severe illness in humans.

5. Red Clover
Another healing weeds that might grow in your backyard is red clover. Red clover weed offers the benefits of soy to menopausal women without any of the drawbacks. It’s an ingredient of traditional spring tonics that purifies and revitalizes the entire system. It has calcium and other useful compounds to treat bronchitis and other respiratory disorders.

6. Nettles
Nettles are well known for their healing properties, they provide huge benefits in arthritis, gout, asthma, hay fever, Alzheimer’s disease, and even baldness. It’s leaves contain several minerals including magnesium, calcium, iodine, and potassium. These leaves lose their sting when cooked. Try them in soup or steeped in tea. You can add them to egg dishes like any other herb.

7. Lavender
Lavender is derived from the Latin lavare which means “to wash.” It’s well loved for its fragrance, but also has anti-inflammatory and antiseptic properties. It was used as an antiseptic in the Middle East, Rome, and Greece and has been used to treat anxiety, insomnia, migraines, and depression.

8. Burdock
The root of the burdock plant is useful for healing, chop the roots and steep them in hot water for 15-30 minutes to make a tea. The natural diuretic burdock root has positive effects on hypertension and may reduce the risk of stroke and heart attack. The tea can also lower blood sugar, ease PMS symptoms, and you can use it topically to treat eczema and other skin irritations.

9. Sow thistle
Sow thistle has broad leaves and yellow flowers which make it look like a brother to dandelions, its health benefits are also similar to that of dandelions. Make a tea or eat it in a salad for treating inflammation and digestive upsets. It also works as an appetite stimulant.

10. Purslane
Purslane, also known as Portulaca oleracea, makes a healthy snack. It tastes sour and has a high content of omega-3 fatty acids. Use small portions of the weed in your food, too much can spoil your dish. Purslane has been used in Chinese medicine to treat infections.