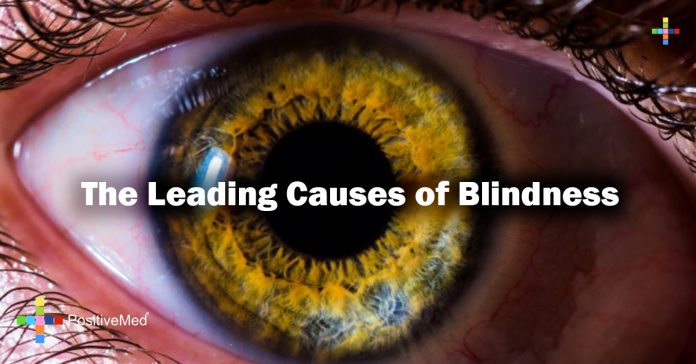 The leading causes of blindness worldwide?

Cataracts. A cataract occurs when proteins in the lens of the eye coagulate and form an opaque layer, causing the normally clear lens to become clouded. The exact cause is unknown, but cataracts tend to affect elderly people, implying that they are related to aging. Diabetes and exposure to ultraviolet radiation are both suspected to increase a person’s chances of developing cataracts.

Most cataracts develop quite slowly and cause no pain. At first, eyesight is barely affected at all. If it is, bright lights or strong glasses may be enough to counteract these initial effects. As a cataract continues to develop, however, its interference becomes impossible to ignore. First, it may become difficult to read, see at night, or drive a car. Problems seeing things from a distance or dealing with glare will begin. Eventually, untreated cataracts cause blindness.

The only prevention is to remove the cataract, which is an effective and fairly safe surgical procedure, although a doctor may not recommend this immediately. To catch cataracts before serious symptoms set in and maximize chances of successful treatment, regular eye examinations are imperative.

Second most popular is glaucoma, which damages the eye’s optic nerve and is a leading cause of blindness. It usually happens when the fluid pressure inside the eyes slowly rises, damaging the optic nerve. Often there are no symptoms at first, but a comprehensive eye exam can detect it. About 2.3 million Americans suffer from glaucoma and an estimated additional 2 million have the disease but don’t know it.

People at risk should get eye exams at least every two years, especially:

Treatment usually includes prescription eye drops, medical marijuana, and/or surgery. There is no “cure” for glaucoma. Early diagnosis and treatment can control glaucoma before vision loss or blindness occurs. New research is focusing not only on lowering pressure inside the eye, but also exploring medications to protect and preserve the optic nerve from the damage that causes vision loss. There has been progress in understanding the genetics of glaucoma in the last few years, including the discovery of genes found to be associated with many forms of glaucoma.

Finally: macular degeneration, often called age-related macular degeneration (AMD), is a leading cause of vision loss in those who are 60 and older. It is a disease that destroys the sharp, central vision needed to see objects clearly. This affects the ability to read, drive, watch television, and do routine daily tasks.

AMD affects the macula, the part of the eye that allows you to see fine detail. It does not hurt, but causes cells in the macula to die. In some cases, AMD advances so slowly that people notice little change in vision. In others, the disease progresses faster and may lead to vision loss in both eyes. There are two kinds of AMD—wet and dry. Wet AMD occurs when abnormal blood vessels behind the retina start to grow under the macula. Dry AMD occurs when the light-sensitive cells in the macula slowly break down, gradually blurring central vision in the affected eye.

Although there is no cure for AMD at this time, regular eye exams can detect the disease so treatment can be most effective. Findings from the NEI-supported Age-Related Eye Disease Study (AREDS) show that a specific combination of vitamins and minerals can help slow the progression of advanced AMD. Treatments for wet AMD include laser surgery, photodynamic therapy, and drugs injected into the eye. The NEI recently started a clinical trial to compare the relative safety and effectiveness of two drugs currently used to treat wet AMD. The two drugs, which are injected into the eye, are Lucentis (ranibizumab) and Avastin (bevacizumab). NEI is also supporting AREDS2 to learn whether a modified combination of vitamins and minerals can further help people with AMD.