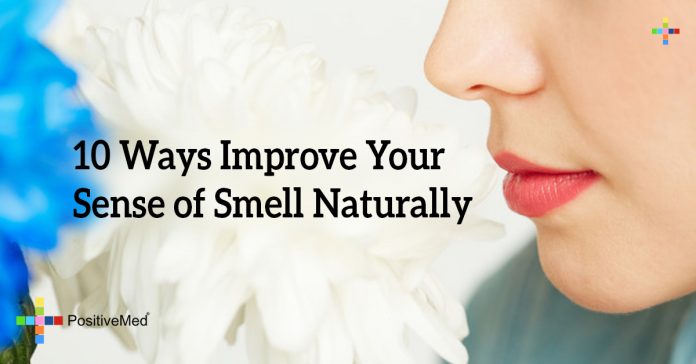 There are many reasons why a person would want to improve their sense of smell. One of the primary reasons is the fact that it is closely associated to your sense of taste. If you have any doubt about that, try to taste something while you pinch your nose. Most of all, having a good sense of smell increases your enjoyment of life. Here are 10 ways that you can improve your sense of smell in a natural way:

There have been several studies published in major medical journals over the past several years that indicate there is a direct link between exercise and an improved sense of smell. The subjects of the studies displayed a sense of smell that was sharper after they worked out for an extended period of time. While the people running the tests were not able to determine the exact reasons for this, working out certainly will not have any negative effects on your body.

This may seem like on obvious one. There are not many people that are going to seek out foul smelling odors, but there is another reason to avoid them, other than the fact that they are unpleasant. If you are exposed to stinky odors for an extended period of time, this will have a numbing effect on your sense of smell.

When most people are trying to smell an aroma that is enjoyable to them, they usually take one very long sniff to suck in as much of the smell at one time as they can. However, it is better to take a series of short and shallow sniffs. This will increase your nose’s ability to detect and enjoy the smell. This is the way that dogs and cats smell something that is new to them.

There are a large number of substances that can tend to dull your sense of smell, especially if you are exposed to them for an extended period of time. Zicam intranasal sprays, smoking and alcohol have all been proven to impair a person’s ability to smell. The higher a person’s blood alcohol level is, the worse their sense of smell becomes.

You should avoid foods that cause your body to produce an excess amount of mucus. Smell-sensitive nerve endings in the nose are dulled by congestion in the membranes of the nose. Therefore, avoid ice cream, yogurt, milk and cheese.

This will not be pleasant for most people. However, testing on rats has shown that when you sniff sweat, the number of receptors in your nose can be increased.

Your nose receptors can be damaged by nitrogen oxides that are commonly found in many urban areas. Cells in the nose last for three weeks. However, pollution can kill these cells before they are able to be replaced [For 22 natural ways to clean your indoor air click here].

It is a good idea to begin to add zinc into your diet. A zinc deficiency has often been associated with olfactory power becoming weakened. Zinc can be found in pecans, oysters, sunflower seeds and lentils. There are also daily zinc supplements that you can buy.

This is often used by wine tasters. Always smell what you are eating or drinking before you taste it. If you are more familiar with smells, you will be better at detecting them.